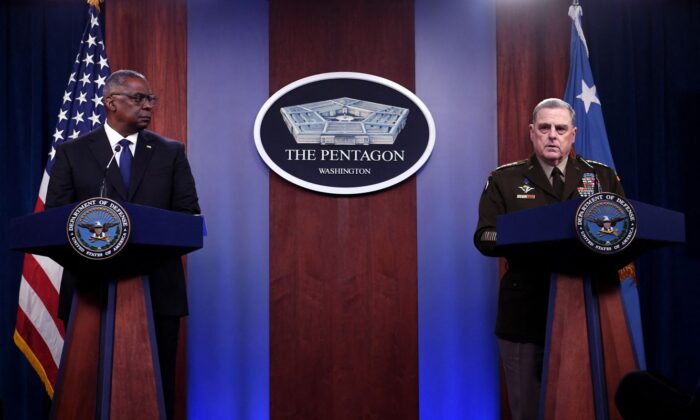 The Biden administration activated the Civil Reserve Air Fleet on Aug. 22 to help with the evacuation of people from Afghanistan, although the flights won’t directly head to the beleaguered Asian nation.

Defense Secretary Lloyd Austin, according to a statement from the Pentagon, activated the fleet and is asking U.S. airlines and charter carriers to take Americans, Afghans who worked with the U.S. government, and other “at-risk individuals” to other locations.

“The current activation is for 18 aircraft: three each from American Airlines, Atlas Air, Delta Air Lines, and Omni Air; two from Hawaiian Airlines; and four from United Airlines,” the statement says. “The Department does not anticipate a major impact to commercial flights from this activation.”

But it noted that Civil Reserve Air Fleet (CRAF) aircraft won’t fly to the airport in Kabul, where thousands of U.S. troops are still stationed in a chaotic and desperate attempt to evacuate tens of thousands of people from Afghanistan a week after the Taliban extremist group took over.

Afghan refugees and workers will be taken to “temporary safe havens” via the CRAF planes, according to the Defense Department, which added that it’s the third activation of the CRAF in its nearly 70-year history. The first occurred during the 1991 Persian Gulf War in Iraq and the second took place in 2002 and 2003 during the second Iraq war.

“CRAF activation provides the Department of Defense access to commercial air mobility resources to augment our support to the Department of State in the evacuation of U.S. citizens and personnel, Special Immigrant Visa applicants, and other at-risk individuals from Afghanistan,” Pentagon press secretary John Kirby said in a statement.

Since President Joe Biden announced the withdrawal of U.S. forces from Afghanistan, the operation has been beset by chaos. Thousands of people—fearful for their lives—flooded Kabul airport, with some even grabbing hold of departing military C-17 planes before falling to their deaths.

The Biden administration, meanwhile, has faced significant criticism from members of Congress, the media, and world leaders, who have accused the president of botching the withdrawal. Biden has also taken flak for taking vacations in Delaware and Camp David amid the chaos and has also been accused of providing inaccurate or incomplete information during his speeches at the White House about whether Americans are having difficulty getting to the Kabul airport.

Outside the airport, meanwhile, at least seven people were killed as crowds stampeded into the facility, the UK military said on Aug. 22. There was significant chaos on Aug. 21 as well, with reporters on the ground saying that British and other U.S. troops in full gear attempted to control the crowds.

“Conditions on the ground remain extremely challenging but we are doing everything we can to manage the situation as safely and securely as possible,” the UK Defense Ministry said in a statement.

Currently, at least 10,000 Americans are estimated to remain in the country, although Kirby and other administration officials have said they aren’t sure of the exact figure.

Amir Khan Motaqi, chief of the Taliban’s guidance council, criticized the United States over the Kabul airport situation, claiming the United States is exacerbating the problem, although Taliban members outside the airport have reportedly attacked people trying to enter, or have even shot at them.

“All Afghanistan is secure, but the airport which is managed by the Americans has anarchy,” he said. “The U.S. should not defame itself, should not embarrass itself to the world, and should not give this mentality to our people that [the Taliban] are a kind of enemy.”

The Taliban is considered by the Office of the Director of National Intelligence and governments around the world to be a terrorist group. Last week, Amnesty International reported that the Taliban brutally tortured and killed members of the Hazara group in another province.