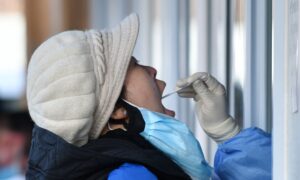 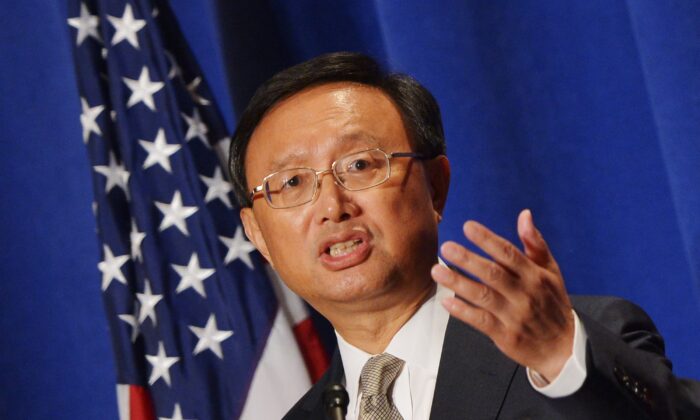 Chinese State Councilor Yang Jiechi speaks at a dinner hosted by the U.S.-China Business Council and the National Committee on U.S.-China Relations in Washington, on July 11, 2013. (Mandel Ngan/AFP via Getty Images)
US-China Relations

Beijing Tells Biden Administration to Play by the CCP’s Rules

China’s top diplomat Yang Jiechi warned the Biden administration not to cross Beijing’s “red line” in a half-hour speech on the evening of Feb. 1.

“The United States should stop interference in the affairs of Hong Kong, Tibet, and Xinjiang,” Yang said, calling the issues regarding the three regions China’s “internal affairs.” He made the remarks while speaking at a virtual event hosted by New York-based nonprofit the National Committee on U.S.-China Relations.

Yang added: “They constitute a red line that must not be crossed. Any trespassing would end up undermining China-U.S. relations and the United States’ own interests.”

He also told the United States that it should “strictly abide by the One China principle” with regards to Taiwan, a self-ruled island that Beijing claims is part of its territory.

The Chinese regime has often deflected international criticism against its own policies by claiming that certain issues, including its militarization efforts in the South China Sea and coercion tactics against Taiwan, are “internal affairs.”

Yang called on the Biden administration to “restore” the China-U.S. relationship to a “predictable and constructive track of development.”

He named areas in which he said the two countries could cooperate, including drug control and cybersecurity.

China is the largest source of illicit fentanyl and fentanyl-like substances in the United States, according to a 2018 report by the U.S.-China Economic and Security Review Commission.

According to data from the U.S. National Institute on Drug Abuse, there were 70,630 drug overdose deaths in the United States in 2019; the majority of the deaths related to the use of fentanyl.

Fentanyl is 100 times more potent than morphine and 50 times more powerful than heroin. As little as two milligrams is considered a lethal dosage for most people.

In 2020, the United States sanctioned several Chinese nationals and a Chinese company for fentanyl trafficking.

Under the Trump administration, the Justice Department brought more indictments related to China’s trade secrets theft and related crimes in 2019 than during the eight years of the Obama administration.

Yang also criticized the Trump administration, saying that its “misguided policies” had led the bilateral relationship to “its most difficult period” since the two countries established diplomatic ties.

Washington ended its diplomatic ties with Taipei in favor of Beijing in 1979 but has maintained a robust relationship with the island based on the Taiwan Relations Act (TRA). Under the Trump administration, the Taiwan-U.S. relationship warmed considerably, most evident by Pompeo’s decision to lift restrictions on how U.S. officials should interact with their Taiwanese counterparts.

Jacob Gunter, senior policy and communications manager at the European Union Chamber of Commerce in China took to Twitter to give his summary of Yang’s speech.

“Trump bad, it’s all his/your fault, and let’s just go back to the 2015 status quo,” he wrote. “The lack of even feigned introspection isn’t even surprising anymore.”

“Bottom line: Beijing is ready [to] cooperate only on China’s terms,” he wrote.

U.S.-based China affairs commentator Tang Jingyuan said in a phone interview that the Chinese regime was using both soft and hard tactics to pressure the administration, in the hopes of restarting official talks with the United States.

Yang’s speech was an example of a soft approach, while recent incursions into Taiwan’s airspace and sanctions on former U.S. officials were hawkish tactics.

His speech could be read as an indication that the Chinese regime would be willing to make concessions if the United States would promise not to cross the “red lines.”

Ultimately, Tang believes the Chinese regime wants to “revert back to a time when human rights and commerce were decoupled from each other” during negotiations, so that the regime could continue to do business with the United States, while ignoring human rights issues.