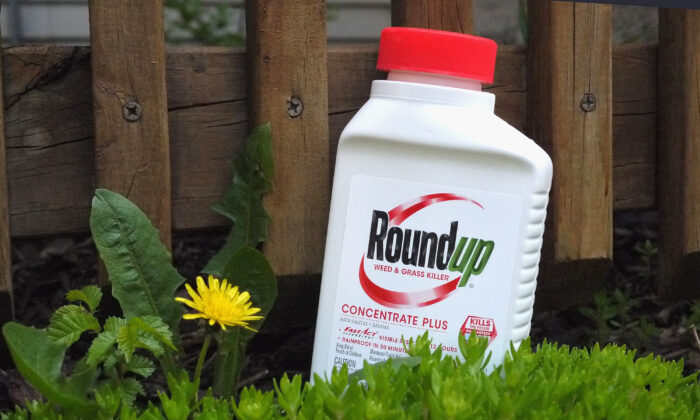 Chemicals giant Bayer AG announced on Aug. 16 it would ask the Supreme Court to overturn an appeals court ruling that upheld damages to a customer blaming his cancer on Roundup, a glyphosate-based weed-killer that has been on the market since the 1970s, in a move aimed at stemming a potential wave of cancer-related lawsuits against it.

Bayer reached a settlement deal in principle with plaintiffs last year but failed to secure court approval for a separate agreement on how to handle future cases, Reuters reports.

The petition in the case known as Monsanto Company v. Hardeman was filed with the Supreme Court on Aug. 16, according to Bayer, though as of press time, it didn’t yet appear to have been docketed by the high court.

Monsanto, based in Creve Coeur, Missouri, was purchased and absorbed in 2018 by Bayer Aktiengesellschaft, a multinational pharmaceutical and life sciences company based in Leverkusen, Germany, for $63 billion.

Cancer patient Edwin Hardeman is a Roundup user in California who was awarded $25 million in damages against the company.

The appeal came after the U.S. Court of Appeals for the 9th Circuit rejected on May 14 the company’s appeal of the verdict in favor of Hardeman.

It also came after the Court of Appeal of the State of California upheld on Aug. 9 an $86 million award to cancer patients Alberta and Alva Pilliod in connection with their use of Roundup.

Bayer didn’t appeal a $20.5 million jury verdict against it over Roundup, won by California school groundskeeper Dewayne Anthony Lee Johnson, who said the product gave him cancer, as The Epoch Times reported in March.

Bayer said in its petition to the Supreme Court that claims that Roundup causes cancer in humans aren’t scientifically proven.

“The Ninth Circuit’s errors mean that a company can be severely punished for marketing a product without a cancer warning when the near-universal scientific and regulatory consensus is that the product does not cause cancer, and the responsible federal agency has forbidden such a warning,” the company said in the court filing.

In addition to its use in gardening and groundskeeping, glyphosate also is widely used by farmers in the United States and Brazil on crops genetically engineered to withstand its herbicidal effect.

Glyphosate is used to control a variety of grasses and broadleaf weeds. The chemical “is used on about 298 million acres of agricultural cropland every year and is effective and affordable,” according to a November 2020 report by the U.S. Environmental Protection Agency.

The Environmental Protection Agency (EPA) and European regulators have found that glyphosate “poses no significant cancer risks to the general public, based on currently approved, food-crop uses and the levels of dietary exposure expected in the general population (including residues in drinking water and beverages),” according to a 2019 article in Environmental Sciences Europe.

In 2015, glyphosate was deemed “probably carcinogenic to humans” by the International Agency for Research on Cancer (IARC), which is part of the World Health Organization.

The case at hand “is one of thousands across the country in which individuals have nonetheless alleged that petitioner violated a state-law duty to warn that exposure to Roundup could cause cancer.”