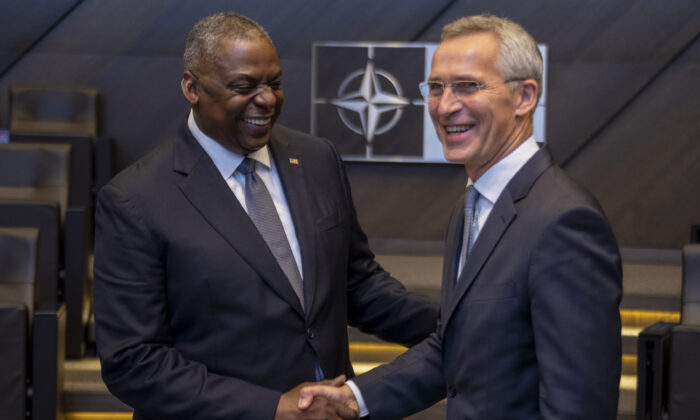 During the two-day ministerial meeting in Brussel, Belgium, both Defense Secretary Lloyd Austin and NATO leaders stressed unity to deal with the current challenges, including threats from the Chinese communist regime.

The ministerial meeting was the first one conducted in person since the COVID-19 pandemic. Austin attended the meeting after visiting the Black Sea region—Romania, Ukraine, and Georgia—earlier this week.

“What we have seen in NATO in the last years, it’s actually a fundamental shift, and where we are now re-focusing our efforts on collective defense to respond to a more competitive world, state-to-state rivalry,” NATO Secretary General Jens Stoltenberg said in a press conference Friday. “And that of course includes the rise of China, which is fundamentally changing the global balance of power.”

A day earlier, Stoltenberg told reporters that China is heavily modernizing its military capabilities, including advanced nuclear systems and long-range missile systems, as well as its capabilities in cyberspace.

“So regarding China, let me just say—and I said it in my opening comments—that alliances like NATO [are] one of our greatest strengths,” Austin said during a press conference Friday.

In a 2019 leaders meeting, NATO allies for the first time publicly declared the need to address the risk posed by China. And at the summit in June this year, the allies elaborated on the challenges presented by China’s ambitions and behavior.

During the Thursday evening CNN town hall event, Biden said the United States had a “commitment” to defend the self-ruled island if Beijing were to attack.

White House press secretary Jen Psaki clarified Friday that “there has been no shift” in Washington’s Taiwan policy, which is commonly known as “strategic ambiguity.”

Stoltenberg also expressed reluctance to NATO being dragged into a U.S.–China conflict over Taiwan.

“I will not speculate about a hypothetical situation. I think what is important now is to reduce tensions in the area,” Stoltenberg told reporters. “And if I started to speculate, I think I actually will contribute to the opposite. So we should solve all disputes and differences and disagreements in the region by political and diplomatic means.”

During the two-day meeting, NATO members agreed to increase the readiness of forces and invest more in defense, in response to the growing threat from Russia’s missile systems.

“Of course, all of that is also relevant to the challenges posed by the rise of China,” Stoltenberg said.

NATO members also talked about Afghanistan during the meetings.