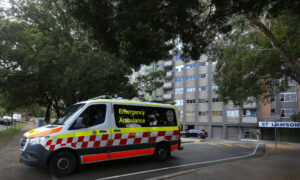 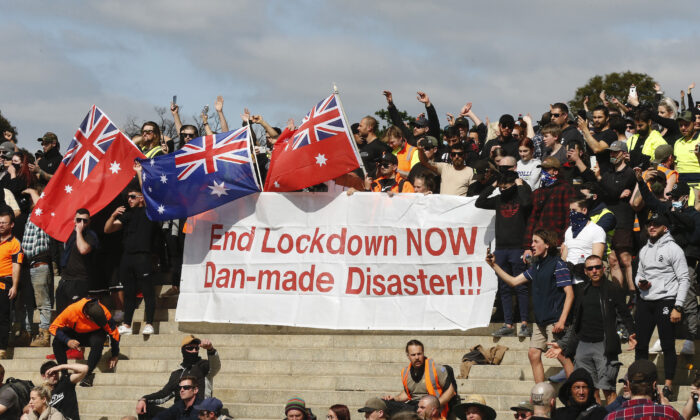 Protesters are seen at the Shrine of Remembrance in Melbourne, Australia, on Sept. 22, 2021. (Darrian Traynor/Getty Images)
Australia

Australians Gather at Shrine of Remembrance for 3rd Day of Protests

Protests have continued for the third day in the Australian city of Melbourne after the Victorian state government shut down the construction industry for two weeks on Tuesday.

The state government cited COVID-19 compliance issues in the construction industry and violent demonstration scenes outside the offices of the CFMEU construction union, which occurred on Monday for the shutdown.

Following protests on Tuesday that wound throughout Melbourne, on Wednesday, protesters marched from the Melbourne CBD to the city’s Shrine of Remembrance, a sacred war memorial.

Hundreds of protesters took up places on the steps of the Shrine while a massive swarm of police kept their distance, seemingly reluctant to encourage any ugly scenes at one of the country’s most sacrosanct locations.

By mid-afternoon, the riot police began to converse and negotiate with members of the protest to offer a way for protesters to leave without being arrested.

Initially, Victoria police offered a deal for protesters to disperse via St Kilda Road. But news soon spread amongst the crowd that some arrests had allegedly been made, harming efforts to build trust.

The protesters countered with their own request to leave the way they came, down through the middle of the Shrine grounds, but officers refused this due to their heavy vehicles being parked there.

Earlier, members of the riot police appeared to take a knee on the east side of the Shrine, which excited the crowd momentarily, who cheered and came over to applaud. But then the officers stood up as riot police approached from the north to close in, and a prolonged standoff began.

Around this time, protesters were heard chanting, “we want peace.”

However, by approximately 4.20 p.m., a police loudspeaker told the crowd they were “free to leave” via St Kilda Road, and officers began to move in on the protesters, eventually surrounding a smaller number of protesters on the steps of the Shrine.

By this time, the crowd of protesters had reduced in size by at least half, according to independent reporter Rukshan Fernando, also known as “Real Rukshan” on social media.

Officers also made several attempts to ask the crowd to leave.

Meanwhile, the Hawthorn branch of the Returned Serviceman’s League criticised the use of the Shrine for any protest. “The Shrine of Remembrance is not a place for protest,” the group wrote on Twitter.

“It is a sacred place for Australians to commemorate those who fought and died for us. We gather there to remember with respect and dignity, and it is not appropriate to use this hallowed location for any protest.”