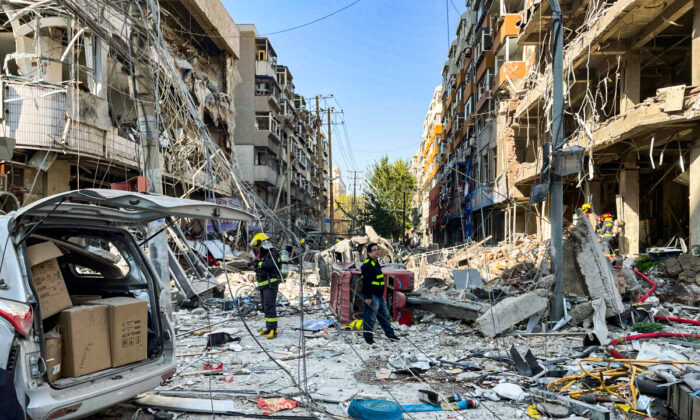 In this photo released by Xinhua News Agency, policemen and firefighters walk through damaged shophouses following a gas explosion in Shenyang in northeastern China's Liaoning Province, Thursday, Oct. 21, 2021. Several people were killed and over dozen injured in the gas explosion at a restaurant in northeastern Chinese city Shenyang Thursday morning, according to local authorities. (Cai Xiangxin/Xinhua via AP)
China

At Least 4 Dead, Over 40 Injured in Gas Explosion in North China

A powerful gas explosion in a BBQ restaurant in northeastern China has killed at least four people and injured 47, local authorities and state media said on Oct. 21.

The blast erupted in a mixed-use commercial and residential building in Shenyang city of Liaoning Province at around 8:20 a.m. Thursday, authorities said. All the injured have been sent to hospitals.

A cloud of dust and debris blew onto a busy street, damaging nearby buildings and vehicles, sending passengers fleeing, according to footage captured by a dashcam and released by state media The Paper.

Images published by state media showed only a concrete skeleton remained of the lower three floors of the building.

A bus passing the scene when the explosion happened was badly damaged, but the number of injuries is still unknown, The Paper reported, citing a staff member of the bus company.

The number of fatalities and the injured rose steadily during the day on Thursday. By 7 p.m. local time, Shenyang authorities said at least three of the 47 people who were taken to hospital suffered grievous injuries.

The exact cause of the gas explosion is still under investigation.

Reports said the gas company was replacing the street’s pipelines the night before, but it’s unknown whether the work was related to the explosion.

Shenyang, a city of 8 million people, is in the process of renovating and replacing decades-old gas pipelines.

State Grid Shenyang Electric Power said in a statement that the explosion caused damage to infrastructure, resulting in the loss of power in nearby homes and hospitals.

China is replacing old infrastructure, with gas lines an especially dangerous part of the project. In June, a gas line explosion at a market and residential area in the central city of Shiyan killed 25.

Deterioration caused by age, weak adherence to safety standards, poor maintenance, and corruption among enforcement bodies are all considered contributors to such disasters. Among China’s worst accidents was a massive 2015 explosion at a chemical warehouse in the port city of Tianjin that killed 173 people, most of them firefighters and police officers.