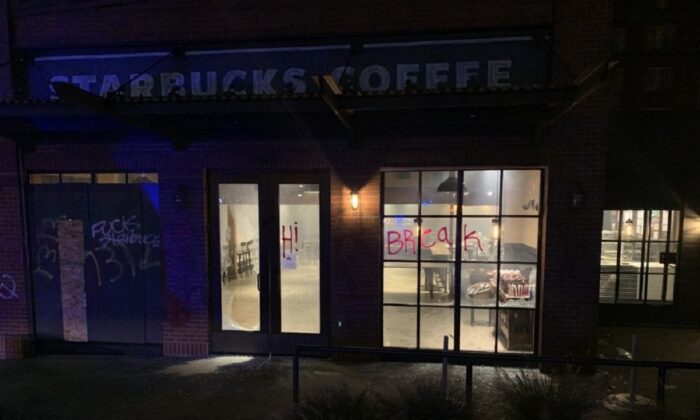 A Starbucks location in Seattle was damaged during a riot in Seattle on Oct. 3, 2020. (Seattle Police Department)
Crime and Incidents

The group marched through part of downtown after gathering at Cal Anderson Park, and chanted “black lives matter” and “no walls, no prisons, total abolition.”

Some members of the crowd committed acts of vandalism and property damage, the Seattle Police Department said in an incident summary, including shattering windows at a coffee shop. They threw explosives inside as well.

At one point, someone in the crowd launched a smoke bomb at officers. It struck a car in front of the officers and obscured their view as they moved towards the rioters. Police said an explosive was thrown at officers.

Meanwhile, a portion of the crowd stopped to shout at diners eating inside a downtown restaurant. It wasn’t clear what they were saying.

HAPPENING NOW: Antifa Militants and Black Lives Matter Rioters break into and launch fireworks inside Starbucks.@SeattlePD declared this protest a riot and issued an order to disperse. #seattleprotests pic.twitter.com/lrFguvqRBX

Rioters continued harassing people who were filming, claiming they were endangering them by recording what was unfolding.

“I’ll break your jaw, bro,” one man told an independent journalist who had been filming.

“As a black person, man, I’m feeling really weird about you standing back recording people,” another man told a live streamer. “One, please go to take yourself over there and start recording the [expletive] pigs, or two, leave. Three, I can do my choice, but you’re not going to like that.”

A third live streamer explained that she only filmed the “pavement and police” in a bid not to show the faces of people protesting or rioting. She stopped streaming when someone approached her and told her, “We’re not doing no streaming, even if it’s lens down.”

One poster for the march said it had been organized by a group called Autonomous Seattle.

“We demand justice for those murdered at the hands of the police, for the abolition of the Seattle Police Department (and police more broadly), and for the transfer of funding into community programs that help, not hurt, people,” it stated, adding later, “Brick by brick, wall by wall, we shall make their racist institutions fall.”

Another poster said the protesters’ goals in nightly events is to “disrupt business as usual,” decrease public support for the police department, and “tie up police resources” while weakening the resolve of officers.