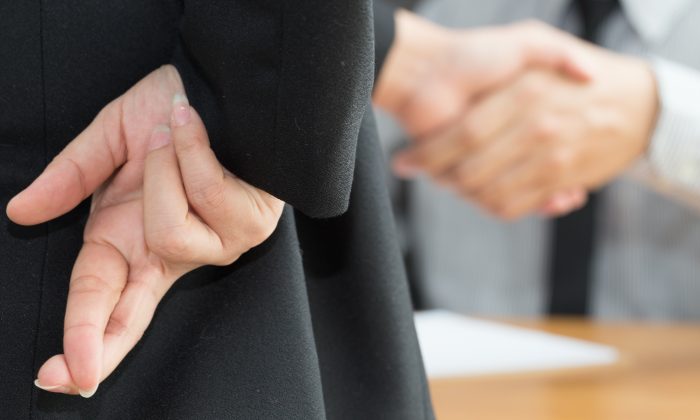 America’s Culture of Deception: The Art of the Con

Truth is the indispensable moral sanction for a healthy society.

Whenever there is deception, or the misrepresentation of truth, the moral order required by society is wounded.

Our nation is experiencing a massive and pervasive pandemic of deception.

We must respond to the crisis of deception and dedicate ourselves to the principles of honor, integrity, and truthfulness.

All human activities demand sincerity, candor, and veracity.  These virtues must be the iron-clad barriers against deceitfulness, duplicity, and hypocrisy.

Truth is a servant of justice, which can never be served by falsehood, slander, perjury, or calumny.

Lying is a direct offense against truth and a profound injustice.  It violates an individual’s right to reputation, honor, and dignity.

Whenever anyone has the right to know the truth and is deceived, the harmony of a moral order is undermined.

Lying is contemptuous and deserves condemnation because it violates justice, charity, and trust.

When lying becomes normalized, the bedrock of trust required by society is violated.

Trust in society is impossible without truth as its foundation.

This statement focused on the sentencing of jewelry store owners for their roles in an international $200 million credit card scheme.

Yet, it clearly highlights the pervasive deception taking place throughout America, causing a rotting of the moral order from within.

In this case, two individuals were the heart of a scheme to fabricate 7,000 false identities to obtain tens of thousands of credit cards.

Participants, according to the official government statement, “doctored credit reports to pump up the spending and borrowing power associated with the cards. Then they borrowed or spent as much as they could, based on the phony credit history, but did not repay the debts-causing more than $200 million in confirmed losses to businesses and financial institutions.”

The statement on this case concludes with sobering statistics memorializing massive fraud taking place throughout America.

Over the past three fiscal years, the U.S. Department of Justice has filed more than 10,000 financial fraud cases against nearly 15,000 defendants. This includes more than 2,700 mortgage fraud defendants.

The Con against America’s Senior Citizens

Compounding the deception throughout America highlighted in the aforementioned, the FBI has concerns for senior citizens.

Senior citizens are often targets for fraud schemes for reasons that include the following:

According to the National Council on Aging (NCOA), the top 10 financial scams targeting seniors are as follows:

Each day we are witnessing the realities of a culture of deception, and its detrimental impact on America.

The crisis of honesty is an indictment of our culture of deception.  It is evident through the slick escapades of con artists victimizing law-abiding citizens through scams, schemes, and shams.

But con artists can also victimize America at the highest levels of government.  These examples are memorialized in the public corruption section of the FBI website and through extensive media coverage.

The list of American politicians convicted of crimes either committed, or prosecuted while holding office in the federal government is a travesty.

This scandalous list includes a Director of the Central Intelligence Agency (CIA), Speaker of the U.S. House of Representatives, Congressmen, a U.S. District Judge, Chief of Staff to a Vice President, Commissioner of the Food and Drug Administration, and the Director of the Domestic Policy Council.

There is no end in sight to these scandals. Pending investigations of officials at the highest level of government will continue. These will certainly result in additional convictions of those who have disgraced the public trust.

Society cannot exist without truth as its foundation.

Truth must be the pillar of America’s families, communities, workplaces, schools, houses of worship, government leaders, and armed forces.

Honesty is the only healing remedy to the venom of deceptiveness.  The virtue of truth must be served by accountability, transparency, justice, and moral decency.

America must have its eyes wide open to those entrusted with leadership.

We have a right to expect truthfulness from all who take the oath to serve.

“We the People” also have the responsibility of reminding our leaders of the words of Thomas Jefferson:

“The whole art of government consists in the art of being honest.”