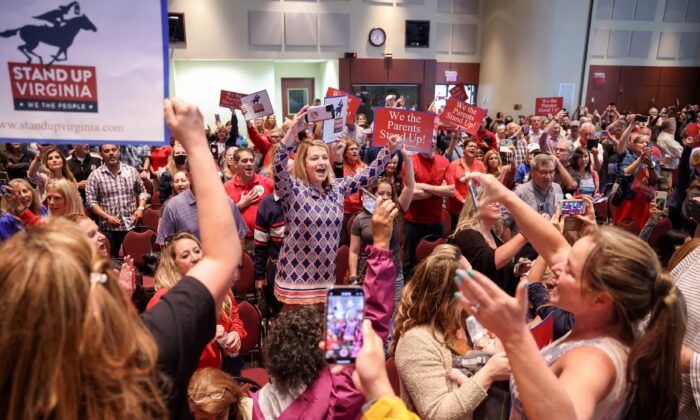 A crowd is seen at a Loudoun County School Board meeting in Ashburn, Va., on June 22, 2021. (Evelyn Hockstein/Reuters)
Congress

Attorney General Merrick Garland opened an investigation on Oct. 4 into violence against educators, declaring that there has been a “disturbing spike” in threats of violence against school administrators, board members, teachers, and staff in recent months.

However, according to information revealed on Oct. 21 during a House Committee on the Judiciary oversight hearing, Garland’s assertion of a “disturbing spike” was based not on law enforcement intelligence or academic studies, but by a letter the National School Boards Association (NSBA) had sent to the Biden administration days earlier.

The letter—which characterizes protesting parents as domestic terrorism threats and calls for the FBI to use statutes such as the PATRIOT Act—has since received significant backlash from the public as well as NSBA board members.

Garland’s statements about the issue came in response to questions from committee member Rep. Jim Jordan (R-Ohio) about when he first noticed the “disturbing spike” in threats of violence against educators.

“I read the [NSBA] letter, and we have been seeing over time—” Garland said before Jordan interjected.

“So you read the letter and that’s your source?” Jordan asked.

Garland said the NSBA, which represents more than 90,000 school board members in the United States, is an authoritative source.

However, internal NSBA records released on Oct. 21 suggest that the association itself doesn’t fully stand behind the letter. The nonprofit organization Parents Defending Education released NSBA emails obtained via the Freedom of Information Act showing that the NSBA board apparently wasn’t consulted before the association sent the letter to the White House.

“I agree with many of my colleagues that the board of directors should have been consulted before a letter like this was sent out publicly, and no less to the President of the United States and the national press,” NSBA board member John Halkias wrote to staff members on Oct. 1. “I also agree that the letter took a stance that went beyond what many of us would consider to be reasonable and used terms that were extreme.”

“Many of us have been put in a position now of explaining or defending this action of our association as we are asked by members of our community if we consider them domestic terrorists for showing up to our meetings and expressing their opinions,” Halkias wrote.

Throughout the hearing, numerous Republican lawmakers criticized Garland for launching his investigation into what largely has amounted to heated school board meetings. Parents groups have increased pressure on boards over the teaching of critical race theory and the imposition of mask mandates—and, at times, contentious meetings have resulted in fights and arrests.

But Jordan pointed out that Garland’s memo was accompanied by a DOJ press release, which stated that the DOJ’s national security division is working on the matter—suggesting that counterterrorism is involved. Other legislators also criticized Garland on the point.

“I have to say I find it deeply disturbing that the National School Board Association convinced the Biden administration to sic you and your Justice Department and the FBI—the full power of federal law enforcement—on involved parents, as if they’re domestic terrorists,” said Rep. Steve Chabot (R-Ohio).

“Other than a brief nod to the First Amendment, you include no guidance how FBI should go about avoiding chilling and intimidating legitimate First Amendment activity,” added Rep. Dan Bishop (R-N.C.).

“In Texas, a parent tore a teacher’s mask off her face. In California, a parent verbally assaulted a principal and physically attacked a teacher who intervened, sending him to the hospital,” Deutch said, criticizing Republicans for what he said is a lack of concern about violence.