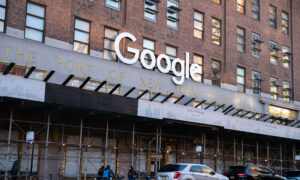 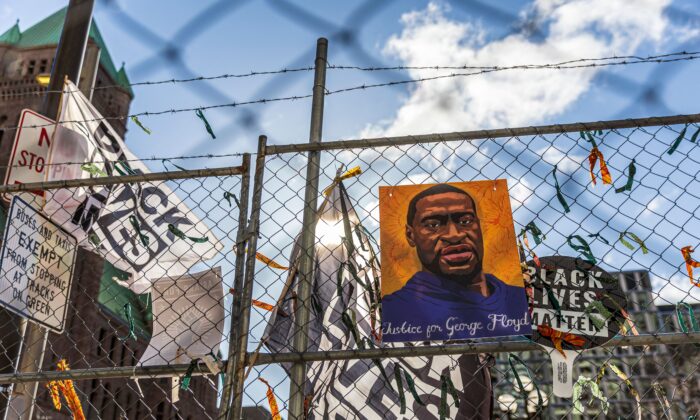 A poster with George Floyd's picture and a sign reads that "I Can't Breathe" hang from a security fence outside the Hennepin County Government Center in Minneapolis, on March 31, 2021. (Kerem Yucel/AFP via Getty Images)
US News

Places where Black Lives Matter (BLM) protests occurred from 2014 to 2019 experienced a decrease in lethal use of force by police but an overall increase in murders, according to an upcoming soon-to-be peer-reviewed academic study.

The study from the University of Massachusetts–Amherst may bolster the so-called Ferguson Effect hypothesis, which holds that police officers are reluctant to do their jobs and follow proper police procedure when dealing with blacks because they fear their actions will be characterized as examples of race-driven police brutality. Ferguson, Missouri, was the site of prolonged violent protests in 2014 after Michael Brown, an 18-year-old black man, was killed there in a physical altercation with a white police officer who eventually was exonerated.

After Ferguson, police reforms followed, including the U.S. Department of Justice distributing 21,000 police body cameras to law enforcement during 2014, and eight cities were the subject of consent decrees aimed at improving policing, the study notes, adding, “While the correspondence between police reform, cultural shifts, and BLM is close, BLM’s direct role is yet uncertain.”

The study came as Patrisse Khan-Cullors, a self-described Marxist and co-founder of the well-funded, influential Black Lives Matter movement provoked a headline-grabbing backlash by purchasing a $1.4 million home in Topanga Canyon, an exclusive, overwhelmingly white suburb of Los Angeles.

The movement took in at least $90 million last year and led nationwide protests following the death of George Floyd in Minneapolis in police custody in May 2020, according to the New York Post. The closely watched trial of Derek Chauvin, one of the police officers accused in Floyd’s death, is currently underway in Minnesota.

The report, by economics doctoral student Travis Campbell, found that Black Lives Matter protests have had an observable effect on the lethal use of force by law enforcement officials.

Campbell examined upwards of 1,600 large BLM protests across the United States from 2014 to 2019. He found that there was a 15 to 20 percent reduction in deadly force by police in census places that experienced BLM protests, amounting to about 300 fewer police homicides.

After BLM protests, “lethal use-of-force fell by 16.8% … on average.” This suggests that for “every 5 of the 1,654 protests in the sample correspond with approximately one less person killed by the police over the following years. The police killed one less person for every four thousand participants.”

But at the same time, murders jumped by 10 percent in areas that saw BLM protests, Jerusalem Demsas writes in a news analysis at Vox.

From 2014 to 2019, there were between 1,000 and 6,000 more homicides “than would have been expected if places with protests were on the same trend as places that did not have protests,” Demsas writes, adding that the study doesn’t take into account the wave of BLM protests that rocked the nation last year after George Floyd’s death, because reliable data aren’t yet available.

Campbell’s research on homicides seems solid, said Omar Wasow, a professor at Princeton University who has conducted research on the effect of protests. He told Vox the results are “entirely plausible” and “not surprising,” given existing protest research.

The underlying data about crime, use of deadly force by police, and protests can be faulty, Demsas notes.

“For lethal force data, there’s no federal database to turn to. Instead, Campbell and other researchers have to rely on nonprofit- and media-collected data, which has some drawbacks. This means Campbell may be missing some police homicides in his research.”

Harvard University sociologist Joscha Legewie said the design of the study is “very well suited” for the kind of data Campbell examined, according to Scientific American.

“It’s extremely important [to have] a better understanding of the processes behind this,” he says. “Are these reductions [in police homicides] driven by reforms initiated in response to protests? That’s a key area we need to understand to draw more conclusions about policy implications.”