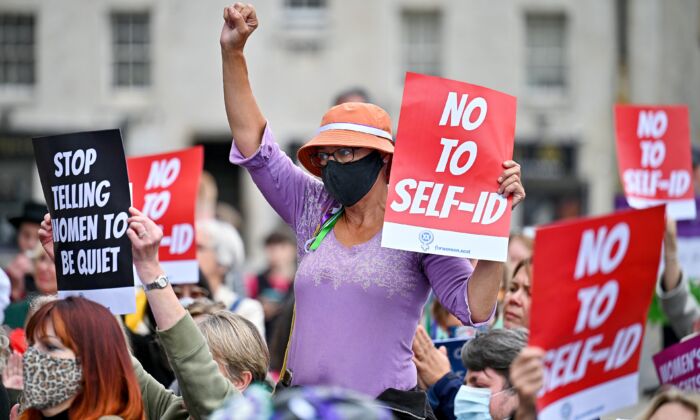 Members of the public take part in a woman’s rights demo against the Scottish government’s decision to allow self-declaration of sex in the 2022 census, in Edinburgh, Scotland, on Sept. 2, 2021. (Jeff J Mitchell/Getty Images)
By Alice Giordano

Girls are the main target of a national transgender movement going on in public schools across the United States, advocates against the trend say.

Theories on the reason why are not in short supply, with the most prevalent belief being that the LGBT agenda sells the power of becoming a dominant male to girls.

“They have been conditioned to consider themselves inferior to boys,” Arthur Schaper, director of MassResistance, told The Epoch Times. MassResistance is a national organization opposed to transgendering minors.

Girls are easier targets because they spend more time on social media than boys, Schaper told The Epoch Times.

Nicole Solas, a senior fellow at the Independent Women’s Forum and a national parent advocate, says she likens the focus on girls by the transgender movement to anorexia as a disorder being almost exclusively among girls.

“Girls hate their bodies at puberty,” Solas told The Epoch Times. “That’s just known about them, so they’re an easy target for anyone who wants to manipulate them.”

Selling the power to transform into the very thing they fear—boys, she believes, has created an epidemic of confused teenage girls, with LGBT-driven programs in public schools pushing them toward what she characterizes as a very self-centered agenda. Solas was awarded the Goldwater Institute Freedom Award in 2021 for her work against social agendas in public schools.

“I think the most kind position to take on this is that there are people who really believe they are helping people who are suffering,” said Solas. “But I think the wrinkle there is they are self-interested in having more people like them.

“When you hyperfocus on something that truly is not common, it is going to have the opposite effect.”

The Epoch Times reached out repeatedly to several LGBT organizations about the issue, including the Gay and Lesbian Alliance Against Defamation (GLAAD); Parents, Families, and Friends of Lesbians and Gays (PFLAG); the Human Rights Campaign (HRC), and The National Center for Transgender Equality; none responded.

The Center for Transgender Equality has a “School Action Center” on its website that includes instructions on how to start and promote transgender programs at public schools, so that transgender kids can develop respect among their peers and don’t feel awkward.

Most LGBT organizations also emphasize that transgender programs in schools are lifesaving because of the high percentage of suicides among transgender youth.

According to a 2019 LGBT Youth Mental Health Survey by the Trevor Project, 57 percent of transgender and nonbinary youth subject to conversion therapy—therapy that attempts to convert homosexuals to heterosexuals—have attempted suicide.

Abigail Martinez told The Epoch Times her daughter committed suicide because she was being pushed by the LGBT community into identifying as a boy. Her daughter Yaeli walked in front of a train in 2019, after she tried to drop out of efforts led by her school in California to convert her to a boy.

When Martinez resisted the school’s efforts to help transition Yaeli to a boy, the school reported her to child protection services and a family court judge gave temporary custody to the state, which started providing the teenager with testosterone injections. Because they had custody of her at the time of her death, the state was also in charge of her obituary and ran her name as “Andrew” in the obituary.

“She was still very much a girl, so I don’t know why they did that,” Martinez said. “Apparently it wasn’t enough to take my daughter away from me.”

Martinez, who has since become a national advocate against transgender programs in school, told The Epoch Times that she, too, has mostly seen girls as the target.

“Yaeli was depressed; the school and these people saw that and exploited that to manufacture more people into their agenda,” said Martinez, who is now suing her daughter’s high school.

A review of lawsuits filed by parents and publicized suicides and attempted suicides by school children who were subject to school-based transgender efforts overwhelmingly shows that girls are at the center of the controversies and tragedies.

Recently, The Heritage Foundation held a panel discussion of parents describing their shock at discovering their child was being secretly groomed by school officials to identify with a new gender. All of them were parents of daughters.

The parents of a 12-year-old Florida girl are suing her school after she twice tried to hang herself following what they allege to be months of secret meetings attempting to transition her identity to a boy.

In November, two Wisconsin families brought a lawsuit against the same school district for changing the names of their daughters, both 12, to boys’ names.

In yet another lawsuit involving a girl, California mother Jessica Konen claimed that teachers at her 11-year-old daughter’s school engaged in predatory brainwashing tactics in attempts to coerce the preteen to identify as a boy.

Konen filed the lawsuit after she obtained an audio recording of an LGBT-led California Teachers Association conference in which the two teachers can be heard discussing their methods of running the club without parents finding out about it.

In one of the most recent cases, a Manchester, New Hampshire, mother filed a lawsuit last month against her daughter’s middle school after learning they were secretly calling her a boy’s name and using male pronouns in reference to her under a new gender policy.

Schaper believes the schools are capitalizing on girls who are “tomboys,” something he said was never sexualized until what he calls the “transgender cult.” They are working at convincing girls that because they don’t like to dress up in dresses or like “girl things,” they must be homosexual.

“Because girls can get away with dressing up in boys’ clothes to begin with, corrupt and perverted adults in the public school system are able to covertly push them more subtly and thus more easily into this transgenderism madness,” he said.