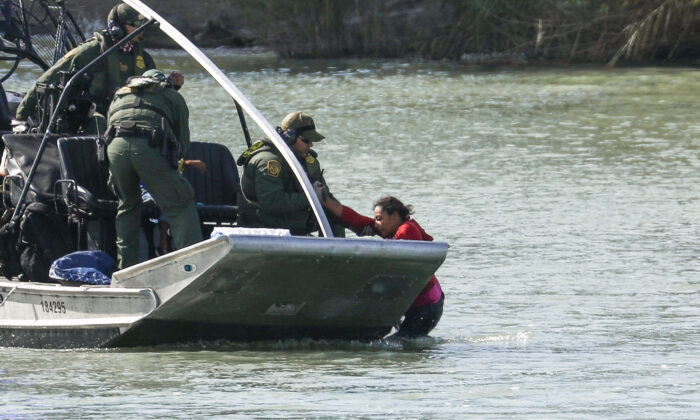 Agents on a U.S. Customs and Border Protection boat rescue a woman and child who got stuck attempting to cross the Rio Grande into the United States illegally at Eagle Pass, Texas, on Feb. 16, 2019. (Charlotte Cuthbertson/The Epoch Times)
Immigration & Border Security

A 9-year-old girl from Mexico drowned while trying to illegally cross into the United States, officials said this week.

The girl, who wasn’t named, was on March 20 crossing the Rio Grande River with an adult woman from Guatemala and the woman’s child, a 3-year-old Mexican native.

“Border Patrol Marine Unit agents responded to assist three individuals stranded on an island on the Mexican side of the Rio Grande River. Agents found the individuals and immediately began administering first aid while transporting the migrants to shore,” Customs and Border Protection said in a statement.

Agents were able to revive the woman and her child but the 9-year-old remained unresponsive.

Agents transferred her care to the Eagle Pass Fire Department’s Emergency Medical Services and she was eventually pronounced dead.

A cause of death was not listed. Lt. Jason Mares of the Eagle Pass Fire Department in Texas told NBC that the incident “was considered a drowning.” The fire department did not pick up the phone on Saturday.

“We extend our deepest condolences to the family and friends of this small child,” CBP’s Del Rio Sector chief patrol agent Austin Skero II said in a statement. “During these hard times our agents remain resilient, and I am extremely proud of their efforts to preserve human life.”

Agents in the sector have rescued over 500 immigrants attempting to illegally enter the country since Oct. 1, 2020, officials said.

The United States has seen a rising number of immigrants cross the border in recent months. The number topped 100,000 in February and is widely expected to have climbed even higher in March.

The Rio Grande has been the site of previous drownings.

Oscar Alberto Ramirez and his young daughter drowned trying to cross the river in the summer of 2019. They had ignored advice against swimming across the river.

Ramirez and his child hailed from El Salvador. The country’s president later described the deaths as “our fault.”

White House press secretary Jen Psaki, asked in Washington on Friday if President Joe Biden had been briefed about the 9-year-old’s death, said the president is “regularly briefed by his immigration team and kept abreast of all developments at the border.”

The images of the girl and other immigrants who have recently passed away “are a reminder of how dangerous this journey is and why this is not the time to come,” she added.