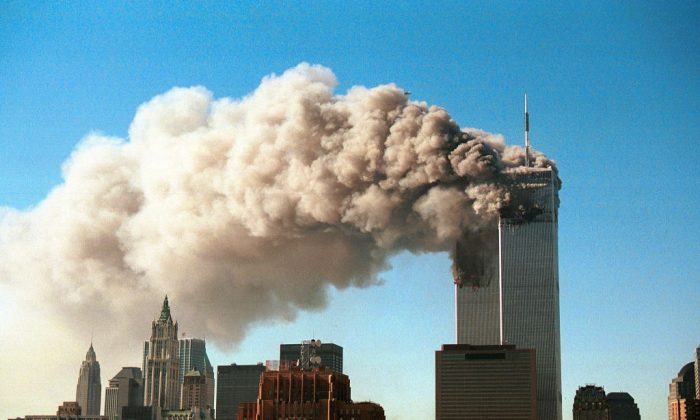 Smoke pours from the twin towers of the World Trade Center after they were hit by two hijacked airliners in a terrorist attack September 11, 2001 in New York City. (Robert Giroux/Getty Images)
Politics

The families of victims who died during the Sept. 11 terrorist attacks sent a letter to President Joe Biden asking his administration to declassify evidence about the incident.

Nearly 1,800 victims who survived, first responders, and family members of slain victims said they want the White House to declassify federal government-held evidence that they believe shows a link between Saudi officials and the assailants.

“We understand President Biden’s desire to mark the solemn occasion of the 20th anniversary at Ground Zero” in New York City, said the letter to Biden, which was obtained by The Epoch Times. “However, we cannot in good faith, and with veneration to those lost, sick, and injured, welcome the president to our hallowed grounds until he fulfills his commitment.”

They noted that Biden, when he was a candidate, told the 9/11 victims that if he was elected, he would direct the attorney general to disclose some evidence relating to the terrorist attacks.

“Since the conclusion of the 9/11 Commission in 2004 much investigative evidence has been uncovered implicating Saudi government officials in supporting the attacks. Through multiple administrations, the Department of Justice and the FBI have actively sought to keep this information secret and prevent the American people from learning the full truth about the 9/11 attacks,” their letter stated.

Over the years, they added, federal officials have ignored or rebuffed bipartisan efforts to provide more transparency on the attacks.

“If President Biden reneges on his commitment and sides with the Saudi government,” the letter said, “we would be compelled to publicly stand in objection to any participation by his administration in any memorial ceremony of 9/11, given its continuation of policies that thwart Americans’ rights to hold accountable those who, known evidence reveals, materially supported the 9/11 hijackers.”

Former Presidents George W. Bush, Barack Obama, and Donald Trump have all declined to declassify the supporting documents in the 9/11 investigation. In 2019, the Trump administration invoked the state secrets privilege to keep that information classified.

Separately, Brett Eagleson, son of Bruce Eagleson who died at the World Trade Center, told CNBC that 9/11 victims’ families who signed the letter are “at our wits’ end with our own government.”

Eagleson is one of a number of victims’ relatives who filed a lawsuit against the government of Saudi Arabia for allegedly partaking in the attacks that left nearly 3,000 people dead, injured 6,000 more, and sparked the U.S. War on Terror that led to the invasions of Afghanistan and later, Iraq.

“We are frustrated, tired, and saddened with the fact that the U.S. government for 20 years has chosen to keep information about the death of our loved ones behind lock and key,” Eagleson told the network.

Several senators, meanwhile, recently on the government to declassify and make available documents about the Saudi government’s alleged ties to the attack.

“If the United States government is sitting on any documents that may implicate Saudi Arabia or any individual or any country in the events of 11 September, these families, and the American people, have a right to know,” Sen. Bob Menendez (D-N.J.) said in a statement.