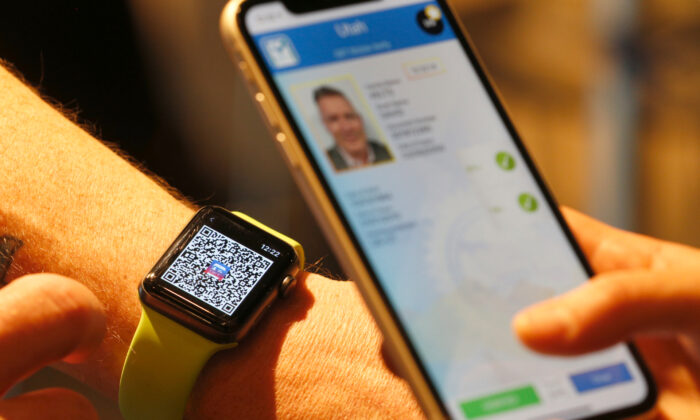 A person scans a QR code on an Apple Watch to temporarily send their digital driver's license to another mobile phone at a Harmons Grocery store in Salt Lake City, Utah on Aug. 4, 2021. (George Frey/Getty Images)
Tech News

Apple announced on Wednesday it will launch, with the cooperation of eight states, a digital version of a driver’s license or state ID that can be installed on an iPhone.

The first states that will roll out the feature to an Apple Wallet or Apple Watch, are Arizona, Connecticut, Georgia, Iowa, Kentucky, Maryland, Oklahoma, and Utah, according to a statement by Apple.

Apple also works with the Transportation Security Administration (TSA) to equip some security checkpoints at selected airports with a touchless capability to read and process digital IDs on iPhone or Apple Watch, the statement said.

Airport customers will be able to “simply tap their iPhone or Apple Watch to present [their IDs] to the TSA, without taking out their physical card or handing over their device,” the statement explained.

To add a driver’s license or state ID to an iPhone, their users will need to tap an ‘add’ button, take a selfie, and “complete a series of facial and head movements during the setup process.”

“Once verified by the issuing state, the customer’s ID or driver’s license will be added to Wallet.”

“Users do not need to unlock, show, or hand over their device to present their ID.”

Apple claimed that neither the state which issued the driver’s license nor Apple will know where and when the device owners presented their ID.

If a device gets lost, its owner can use Apple’s app called Find My to locate the lost phone, and lock it or erase its contents.

Arizona and Georgia will be the first states to introduce this new feature to their residents, with six other states following soon, the statement added.

“Arizona is at the leading edge of states making mobile IDs available to the public, and we are pleased to work with Apple and give Arizonians the choice, convenience, and security of adding their driver’s license to their Apple Wallet,” Eric Jorgensen, director of the Arizona Department of Transportation Motor Vehicle Division, said in the statement.

Spencer R. Moore, commissioner of the Georgia Department of Driver Services, said in the statement, “Georgia is a national leader when it comes to the safety and security of its driver and identity credentialing process, with more than 99 percent of Georgians REAL ID compliant.”

REAL ID is a set of security standards enacted by Congress in 2005 that needs to be followed by agencies issuing identification documents such as driver’s licenses, according to the Department of Homeland Security. Georgia has followed these rules since 2012, said Georgia’s Department of Drivers Services.

“Together [with Apple], we will deliver customer convenience through touchless identity verification and enhanced security and privacy protection through technology,” Moore said. “The identity proofing bar has been raised significantly thanks to Apple and innovative states like Georgia.”

The idea of expanding mobile phones to prove a person’s identity have raised some concerns that consolidating so much personal information on a phone increases the risk of infringement on one’s privacy.

Shelia Dunn Joneleit, a spokesperson for the National Motorists Association, told the Associated Press in May, “When you have a physical thing in your hand, no one can hack that unless you lose it.”

She also expressed a concern that the digitalization of IDs may impact people’s rights in states that require a driver’s license or state ID to vote because not everyone can afford a smartphone.

Moreover, if people hand over their mobile phones to police it may potentially violate the Fourth Amendment which protects people against unreasonable searches and seizures by the government, Joneleit said.