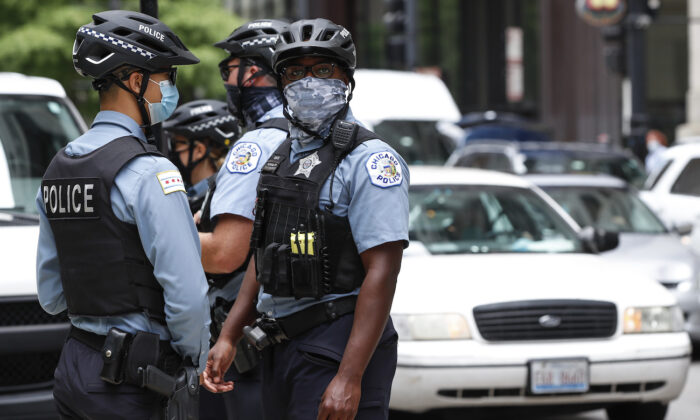 Police said that nearly 50 people were shot, including seven fatally, over the weekend in Chicago. Officials also said a 5-year-old girl was also stabbed to death.

Officials told local media that at least 48 people were shot between the evening of Friday, Sept. 25, and the early morning of Monday, Sept. 28.

Four people were shot and killed on Saturday, including two in Austin on the West Side and two deaths on the South Side, police told the Chicago Sun-Times. Another two people were killed on Sunday, and another victim died on Friday night in the Burnside area of South Side.

All of the fatal victims were males, and the youngest was 17 years old, authorities told the paper. The oldest was 66 years old, they added.

Meanwhile, a 5-year-old girl was fatally stabbed on Saturday morning in East Garfield Park, said Chicago police officials. A 20-year-old was pulled from the Chicago River with stab wounds in a separate incident on Sunday, said police.

Officials said that also, a 17-year-old boy, identified as Avion Aldridge, was fatally shot Saturday in Austin on the West Side several blocks near where another young male was found dead on the same day, WBBM reported. The teen was approached by two suspects at around 11 a.m. local time before they fired shots at him.

In one two-hour period on Sunday, nine people were shot and two died, according to Chicago police. At around 5 p.m., someone dropped off a 20-year-old man with a gunshot wound to the head at St. Bernard’s Hospital, authorities told the Chicago Tribune, adding that the person who dropped him off at the facility left. The man was pronounced dead at the hospital.

Officials said that this year, shootings and homicides in Chicago have spiked compared to recent years, according to data (pdf) released by police. The totals are up about 50 percent over 2019.

Earlier this month, Mayor Lori Lightfoot, a Democrat, noted that juvenile shootings and deaths are also up. So far, about 272 juveniles have been shot in 2020, and 45 of those have died.

That includes the shooting death of 8-year-old Dajore Wilson, who was killed on Labor Day when suspects in a vehicle opened fire on her family’s SUV.

“We cannot normalize this behavior,” she said on Sept. 18. “We cannot shelter the people who are recklessly destroying the fabric of our community and, particularly, bringing harm to our children.”