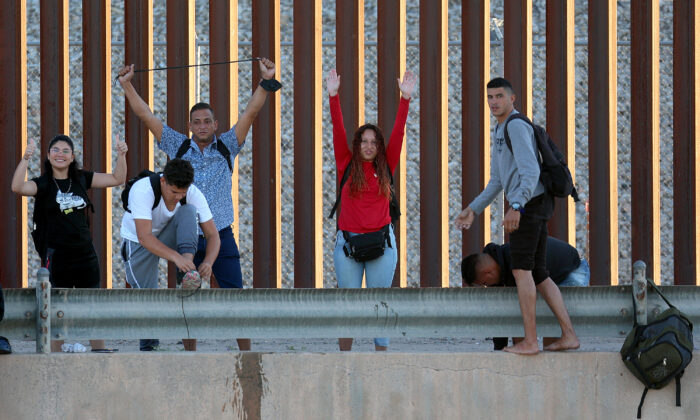 Venezuelan migrants gesture as they reach the U.S. border fence to turn themselves in to the U.S. Border Patrol after crossing the Rio Grande from Mexico in El Paso, Texas on Sept. 22, 2022. (Joe Raedle/Getty Images)
By Tom Ozimek

Tom Ozimek
Reporter
Tom Ozimek is a senior reporter for The Epoch Times. He has a broad background in journalism, deposit insurance, marketing and communications, and adult education.
View profile
and Steve Lance

The total number of people who have entered the United States illegally since President Joe Biden took office has climbed to 5.5 million, according to the Federation for American Immigration Reform (FAIR).

Dan Stein, president of FAIR, shared the stark number during a recent interview on NTD’s “Capitol Report” program, which followed a recent announcement by the Biden administration that nearly 2.8 million illegal border crossers were stopped in the fiscal year ended in September, a record high.

U.S. Customs and Border Protection (CBP) disclosed the figures in a recent operational update that brought the total official number of illegal border crossers to around 4.4 million since Biden took office.

Stein said FAIR arrived at the 5.5 million figure by adding to the 4.4 million an estimated 1.1 million who managed to evade capture and entered the United States undetected.

“It’s pretty straightforward,” Stein said of the estimate. “There are typical projections that are confirmed by Census data of people who just run around—they call them ‘gotaways’—who enter without inspection, then disappear.”

“If you look at the entire period, it’s about 5.5 million since Biden took office,” adding that FAIR projections estimate the cost to taxpayers to be $20 billion.

Stein blamed the Biden administration for dismantling Trump-era “deterrence strategies” along the border for the surge.

The White House did not immediately return a request for comment on the figures Stein cited.

CBP said that a surge in migration from Venezuela, Cuba, and Nicaragua in September brought the number of illegal crossings to the highest level ever recorded in a fiscal year.

Chris Magnus, CBP Commissioner, said in a statement that the agency would work with regional partners to “address the root causes of migration, expand legal pathways, facilitate removals, and take thousands of smugglers off the streets.”

Nearly 78,000 individuals from Venezuela, Cuba, and Nicaragua were stopped in September trying to cross the border illegally, a 245 percent increase compared to the same month a year prior.

This compares to about 58,000 illegal border crossers from Mexico and the three countries of northern Central America, which have historically accounted for most of the flow but which were down 23 percent compared to September 2021.

Republicans, for whom stemming the flow of illegal immigration has been a priority and key campaign platform ahead of the midterm elections, have blamed the record-breaking influx of illegal immigrants on the Biden administration’s policies.

“Thanks to @POTUS’ reckless open border policies, migrant encounters at the SWB have surpassed 2 million in FY22 for the first time in history,” Republicans on the House Homeland Security Committee said in a recent post on Twitter.

“Secure the border. End of quote. Repeat the line,” they added.