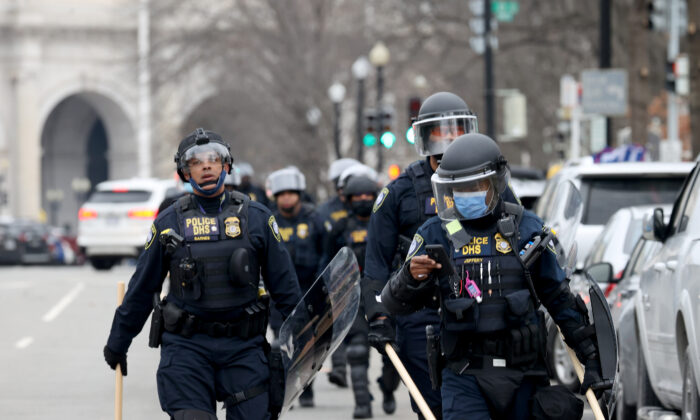 Police officers in riot gear walk towards the U.S. Capitol as a group protesters breached the Capitol building in Washington on Jan. 6, 2021. (Tasos Katopodis/Getty Images)
US News

At least 35 Capitol police officers are being investigated and six were suspended following the U.S. Capitol breach on Jan. 6, officials said on Thursday night.

“Our Office of Professional Responsibility is investigating the actions of 35 police officers from that day. We currently have suspended six of those officers with pay. Acting Chief Yogananda Pittman has directed that any member of her department whose behavior is not in keeping with the Department’s Rules of Conduct will face appropriate discipline,” the U.S. Capitol Police said in a statement to local news outlets.

Officials did not elaborate on the nature of the investigation, although videos show police officers standing motionless as groups made their way into the Capitol building on Jan. 6. Some of those who entered the building claimed that officers allowed them inside.

In January, two officers were suspended by the department, according to Rep. Tim Ryan (D-Ohio), who chairs the House Appropriations Committee. Ryan alleged that one of the officers took a selfie photo with one of the protesters.

And following the breach, a number of the Capitol Police department’s leadership resigned.

Capitol Police union leader Gus Papathanasiou told CBS8 in late January that the department’s leadership failed officers on Jan. 6, saying: “Between USCP and our colleagues at the Metropolitan Police Department, we have almost 140 officers injured.”

“I have officers who were not issued helmets prior to the attack who have sustained brain injuries. One officer has two cracked ribs and two smashed spinal disks,” he alleged.

Earlier this week, the union delivered an overwhelming vote of “no confidence” to Pittman, who became the department’s chief two days after the Capitol breach. Around 97 percent voted “no confidence” in Capitol Police Captain Ben Smith, according to the union.

Former Department of Homeland Security Secretary Chad Wolf told CBS News this week that Capitol Police were given intelligence suggesting there was a heightened threat on Jan. 6.

“Why they did not execute a plan, if they had a plan in place, to further protect that Capitol I think is an ongoing question,” Wolf said.

The Justice Department charged more than 250 people for storming the Capitol during the Joint Session of Congress. The incident also led to the Democratic-led impeachment of former President Donald Trump, which ultimately failed in the Senate earlier this month.

Trump, for his part, told supporters on Jan. 6 to protest “peacefully and patriotically,” while House Democrats said he was solely responsible for the breach.

In the aftermath of the breach, thousands of National Guard members were deployed and a chain-link fence with barb wire was erected outside Capitol Hill.

The Epoch Times has reached out to the Capitol Police for comment.