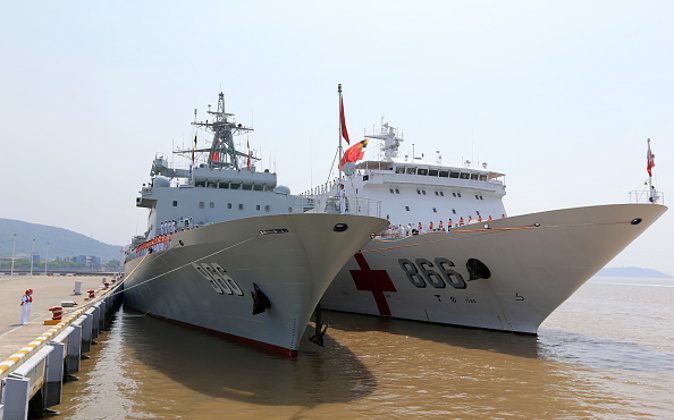 ZHOUSHAN, CHINA - JUNE 15: (CHINA OUT) The supply ship Gaoyouhu and the hospital ship Peace Ark are gonging to set sail to Hawaii to join 2016 Pacific Rim (RIMPAC) on June 15, 2016 in Zhoushan, Zhejiang Province of China. It was the second time that Chinese navy had participated in RIMPAC. According to schedules, the Chinese navy fleet would meet the United States Navy at the western Pacific Ocean on Saturday. Then the two countries' navy would leave for Pearl Harbor, Hawaii. (Photo by Li Tang/CNSPHOTO/VCG via Getty Images)
US

The world’s largest maritime exercises are about to commence with the theme of “Capable, Adaptive, Partners,” but some question China’s participation in the event.

The Rim of the Pacific (RIMPAC) war games taking place later this week from June 30 to July 4 around the Hawaiian Islands and Southern California will feature 26 nations, 45 ships, five submarines, more than 200 aircraft, and 25,000 personnel.

Countries participating in the event include the United States, Canada, and Mexico from North America; the United Kingdom, France, Germany, Denmark, and Italy from Europe; China, Japan, and Korea from Asia; and Australia and New Zealand from the Pacific.

Denmark, Germany, and Italy will be first-timers at the event.

Specific exercises will include those for disaster relief and complex warfighting, as well as anti-submarine, air defense, and counter-privacy exercises.

China and Its Aggressive Territorial Claims

The Navy Times expressed skepticism at China’s  participation in the event.

Members of Congress and the U.S. defense community have reportedly called for China’s invitation to be withdrawn due to growing tensions over China’s aggressive territorial claims in the South China Sea.

Malaysia, Brunei, and the Philippines—Asian countries participating in the exercise—all have overlapping claims with China.

Japan has accused Chinese warships of improperly sailing near Japanese territorial waters in recent months and is currently in a dispute with China over the Senkaku Islands in the East China Sea.

“Inviting the PRC (People’s Republic of China) to RIMPAC 2014 was equally contentious … but the idea was that this would improve Chinese behavior,” says Grant Newsham, senior research fellow at the Japan Forum for Strategic Studies, in Tokyo. “We’ve now got two years of empirical evidence to determine if PRC behavior has improved. It hasn’t.”

China participated in RIMPAC, held every other year, for the first time in 2014.