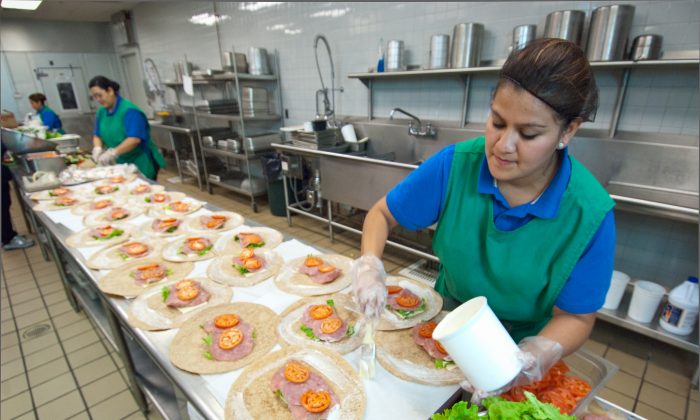 Twenty-two states are suing the Biden administration for threatening to withhold billions of dollars in school meal program federal funding unless the states comply with new rules regarding gender identity and sexual orientation in schools.

The lawsuit against the U.S. Department of Agriculture represents the latest volley between state and administration officials, who are accused of usurping their authority through presidential executive orders. The Tennessee and Indiana attorneys general are heading the coalition of states alleging that President Joe Biden and the USDA, which oversees the meal program, “issued directives and rules that misconstrue the law and impose unlawful requirements,” the lawsuit says.

The states complain that a federal nondiscrimination rule, set to take effect Aug. 15, seeks to impose “obligations that apparently stretch as far as ending sex-separated living facilities and athletics and mandating the use of biologically inaccurate preferred pronouns,” according to the lawsuit, which was filed in U.S. District Court in Tennessee on July 26.

“The Biden administration’s sweeping rhetoric treats normal practices, such as sex-separated bathrooms and athletics, as ‘discriminatory’ even though DOJ [Justice Department] and the Department of Education treated those as legal, nondiscriminatory practices as recently as last year,” the suit says.

The Supplemental Nutrition Assistance Program (SNAP) provided $2.6 billion to Tennessee alone last year; the 22 states received a total of almost $29 billion through the program for low-income schoolchildren, working families, the elderly, and people with disabilities.

Indiana Attorney General Todd Rokita railed against the “extreme left-wing agenda” that he believes is fueling these policies.

“They’ve reached a new level of shamelessness with this ploy of holding up food assistance for low-income kids unless schools do the Left’s bidding,” Rokita said in a statement.

Rokita says he is “fighting for Hoosier common sense and the rule of law,” which is what he believes citizens elected him to do.

The White House didn’t immediately respond to an email requesting comment on the lawsuit.

Before filing suit, attorneys general from 26 states sent a letter to the president on June 14, expressing their concerns.

“By vastly expanding the concept of ‘discrimination on the basis of sex’ to include gender identity and sexual orientation, the guidance does much more than offer direction,” the letter stated.

“It imposes new—and unlawful—regulatory measures on state agencies and operators receiving federal financial assistance from the USDA. And the inevitable result is regulatory chaos that would threaten the effective provision of essential nutritional services to some of our most vulnerable citizens.”

About 100,000 public and nonprofit private schools and residential child care institutions receive federal funding to provide subsidized free or reduced-price meals for qualifying children, according to a statement from Rokita.

The states’ suit against the USDA is similar to a separate federal lawsuit that 20 states, including Tennessee and Indiana, filed against the Department of Education and the federal Equal Employment Opportunity Commission.

In that case, a federal judge issued a preliminary injunction in favor of the states. The order temporarily blocks the federal agencies from forcing the states to allow biological males to compete on girls’ sports teams.

The court ruled that they won’t be required to eliminate sex-separated showers and locker rooms, nor will they be compelled to use the designated pronouns that individuals request.

The school-meals lawsuit against the department seeks the same relief.

In both the Education Department suit and the USDA suit, the policy changes didn’t go through Congress.

Instead, federal agencies created them under an executive order that the president issued in January 2021, requiring policies that would fight discrimination based on “gender identity or sexual orientation.”

The states say they don’t deny SNAP benefits based on those factors. But they take issue with memoranda and a “final rule” that both attempt to impose “unlawful and unnecessary new obligations.”

The states sued “to prevent the department from usurping authority that properly belongs to Congress, the states, and the people, and to eliminate the nationwide confusion and upheaval” that the proposed rule has caused, the lawsuit says.

“When will the Biden administration learn that making law is the legislature’s role?” Ohio attorney general David Yost said in a statement.