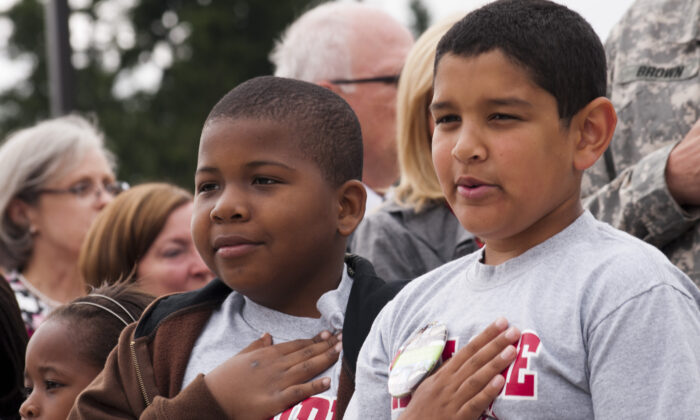 Children recite the Pledge of Allegiance during a groundbreaking ceremony for new elementary schools at Joint Base Lewis-McChord, Wash., July 30, 2012. (U.S. Army photo by Staff Sgt. Bernardo Fuller/Released)
US News

South Dakota Gov. Kristi Noem announced recently that she’s the first candidate nationwide to promise to fight action civics and critical race theory by signing the 1776 Pledge to Save Our Schools, a pledge drafted by a new patriotic education group.

The pledge signed by the Republican governor is promoted by 1776 Action, a new 501(c)(4) nonprofit founded by Adam Waldeck, former aide to former Speaker of the House Newt Gingrich. Gingrich and former Housing and Urban Development Secretary Ben Carson support the group. All the major candidates in the recent contest for the Republican Party nomination for governor of Virginia also signed the pledge.

“1776 Action is an issue advocacy organization focused on stopping the anti-American indoctrination happening in our schools,” the group said in a statement. “Our goal is to make this a central voting issue in state and local elections where decisions over education are primarily made.”

“We’re doing that through ongoing ad campaigns, as well as the release of The 1776 Pledge to Save Our Schools to help parents evaluate relevant candidates and officials.”

1776 Action opposes action civics, which refers to K–12 and college students being required to protest and lobby for political causes for course credit.

Critical race theory—whose proponents frequently denounce American culture and history as “Eurocentrism” and “whiteness”—is “a variation of critical theory applied to the American context that stresses racial divisions and sees society in terms of minority racial groups oppressed by the white majority,” according to the report of the 1776 Commission (not to be confused with 1776 Action).

“Equally significant to its intellectual content is the role Critical Race Theory plays in promoting fundamental social transformation,” the report states, “to impart an oppressor-victim narrative upon generations of Americans. This work of cultural revolution has been going on for decades, and its first political reverberations can be seen in 1960s America.”

“In classrooms across the country, the far Left is successfully indoctrinating children with anti-American lies and divisive theories that pit them against one another based on race and gender,” Waldeck told The Epoch Times in a statement.

“We don’t have decades to waste trying to persuade them that they are misguided, and so 1776 Action was founded to defeat them politically, culturally, institutionally and financially.”

“Teaching our children & grandchildren to hate their own country & pitting them against one another on the basis of race or sex is shameful & must be stopped,” Noem wrote on Twitter. “I’m proud to be the 1st candidate in America to sign ‘The 1776 Pledge to Save Our Schools.’”

It also comes as Democrats promote the proposed Civics Secures Democracy Act in Congress, which involves distributing $1 billion per year in federal grants over six years for K–12 curriculum development, teacher training, and research on the teaching of history and civics. Some of the money will go toward action civics.

The 1776 Commission report states that action civics “uses direct community service and political action (such as protesting for gun control or lobbying for laws to address climate change) to teach students to bring change to the system itself.”

The education bureaucrats who will be in charge of disbursing the money from the proposed act are overwhelmingly left-wing, and the recipients are likely to be of the same ideological stripe, conservative critics say.

The grant money handed out under the legislation will promote so-called woke education in the nation’s classrooms, including critical race theory and action civics, merging “the culture war [and] … K–12 education-policy disputes to a degree never before seen,” according to Stanley Kurtz, a senior fellow at the Ethics and Public Policy Center.

The 1776 Action pledge itself consists of a statement signed by the candidate promising constituents that he or she “will take concrete steps” to fix K–12 public schools.

The candidate vows to “restore honest, patriotic education that cultivates in our children a profound love for our country,” and to “promote a curriculum that teaches that all children are created equal, have equal moral value under God, our Constitution, and the law, and are members of a national community united by our founding principles.”

Among 1776 Action’s objectives are “supporting candidates for school boards, state boards of education, and other relevant offices who believe in teaching our children to love America,” and “defeating local and state education officials who indoctrinate our children with the false and divisive lies of the radical Left.”

The group also aims to use targeted messaging campaigns to pressure colleges and universities “to stop the anti-American propaganda,” and promote “pro-American alternatives to the radical version” of American history that is taught in many parts of the country.