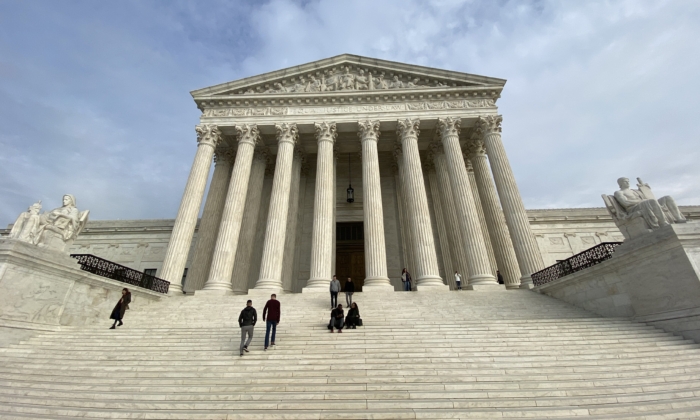 Seventeen states are urging the U.S. Supreme Court to take up Texas’s request to challenge the 2020 election results in four battleground states.

The states, led by Missouri Attorney General Eric Schmitt, filed a friend-of-the-court brief on Dec. 9, underscoring that the case filed by Texas is of great public importance and requires the attention of the nation’s top court.

Texas on Dec. 7 filed a motion asking for permission to sue Pennsylvania, Georgia, Michigan, and Wisconsin in an attempt to protect the integrity of the 2020 election.

In the brief, the 17 states argue that the Texas lawsuit warrants review by the high court as it presents important constitutional issues under the Electors Clause. It also raises concerns about election integrity and public confidence in the handling of elections, they added.

The states said they have a strong interest in protecting the separation of powers in how elections are regulated. When election officials made changes to the rules governing elections, these non-legislative actors may have encroached on the power given to state legislatures by the Electors Clause in the U.S. Constitution, they assert.

Under the U.S. Constitution, the “times, places, and manner of holding elections” may only be prescribed by the state “legislature” and “Congress.”

“Encroachments on the authority of state Legislatures by other state actors violate the separation of powers and threaten individual liberty,” the states wrote (pdf).

Meanwhile, the changes made by the defendant states to mail-in voting rules during the COVID-19 pandemic, the 17 states argued, would have likely enhanced the risk of election fraud, since they strip away safeguards protecting against fraudulent behavior.

They added that the relaxation of safeguards for mail-in ballots create “needless vulnerability to actual fraud and undermined public confidence in the election.”

Some of these changes include removing signature verification, extending the deadline to receive mail-in ballots, and failing to implement consistent statewide standards for the handling of mail-in ballots, the Texas lawsuit alleges.

“These changes removed protections that responsible actors had recommended for decades to guard against fraud and abuse in voting by mail,” the states claim in their brief.

Texas is hoping to obtain a declaration from the Supreme Court that the four states conducted the 2020 election in violation of the Constitution. It is also asking the court to prohibit the count of the Electoral College votes cast by the four states. For the defendant states that have already appointed electors, it asks the court to direct the state legislatures to appoint new electors, in line with the Constitution.

The court has ordered the defendant states to respond to Texas’s motions by 3 p.m. on Dec. 10.

Following the filing of the brief, Arizona Attorney General Mark Brnovich later in the day filed a request to the top court for permission to file his own brief in support of Texas (pdf).

President Donald Trump has also asked the court to allow him to join Texas in the case as a plaintiff. The president on Dec. 9 has described the case as “the big one,” adding that the “Country needs a victory.”

Ivan Pentchoukov and Alan Cheung contributed to this report.