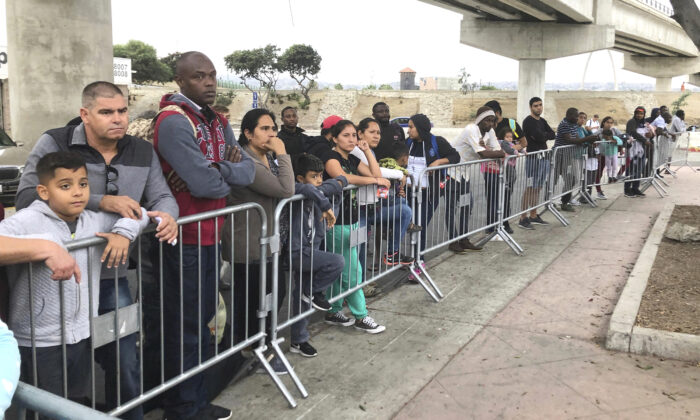 Asylum seekers listen to names being called from a waiting list to claim asylum at a border crossing in Tijuana, Mexico, on Sept. 26, 2019. (Elliot Spagat/AP Photo)
Executive Branch

Eleven states filed a motion challenging the White House’s move to rescind a Trump-era policy that seeks to ensure that immigrants can financially support themselves in order to become American citizens or obtain permanent residency.

The motion, led by Arizona Attorney General Mark Brnovich, is part of a lawsuit that his office filed on Feb. 3 against a recent immigration policy issued by the Department of Homeland Security (DHS) that halts most deportations for 100 days.

But the new motion—filed in the 9th Circuit Court of Appeals—pertains to the “Public Charge Rule” after the Biden administration abandoned the defense of the law in the Supreme Court.

“It is unconscionable to overwhelm our infrastructure and immigration personnel when we are dealing with the health and economic devastation of the pandemic,” said Brnovich, a Republican, in a statement on March 11. “While regardless of one’s position on immigration reform, this reckless violation of federal law is only creating another national crisis and putting additional strains on our state and hardworking Arizona taxpayers.”

Brnovich’s lawsuit (pdf) said that “invalidation of the Public Charge Rule will impose injury on the states” to the tune of about “$1.01 billion in foregone savings in transfer payments for all states annually.”

The Supreme Court had agreed last month to hear challenges to the 2018 rule, but the current administration noted in its request that all parties agreed to ask the court to dismiss the case. Immigration advocacy groups, activists, and some Democrats said the rule was tantamount to a wealth test for immigrants seeking citizenship or a green card.

“The Trump rule erected an invisible wall in the form of a wealth test that discriminated against people on the basis of race as a condition for regularizing their immigration status,” the Legal Aid Society said last month.

“The 2019 public charge rule was not in keeping with our nation’s values,” Mayorkas said in a March 10 statement. “It penalized those who access health benefits and other government services available to them.”

The DHS said a day before that it would revert to Clinton-era rules that instructed officials to deem immigrants public charges if they were receiving government cash benefits or long-term care in hospitals or other care facilities.

“Under the 1999 interim field guidance, DHS will not consider a person’s receipt of Medicaid (except for Medicaid for long-term institutionalization), public housing, or Supplemental Nutrition Assistance Program (SNAP) benefits as part of the public charge inadmissibility determination,” the department said in a statement. The agency also said that vaccination and other medical treatment for COVID-19, the disease caused by the CCP (Chinese Communist Party) virus, won’t be considered public charge determinations.

In a separate case, Texas Attorney General Ken Paxton, a Republican, filed a lawsuit against the White House’s 100-day deportation freeze. A federal judge in February temporarily paused the moratorium twice before placing an indefinite halt on the Biden order.

Arizona and Montana are also challenging the White House’s “Interim Guidance” that was issued by the acting director of Immigrations and Customs Enforcement on Feb. 18.

Homeland Security officials didn’t immediately respond to a request by The Epoch Times for comment.