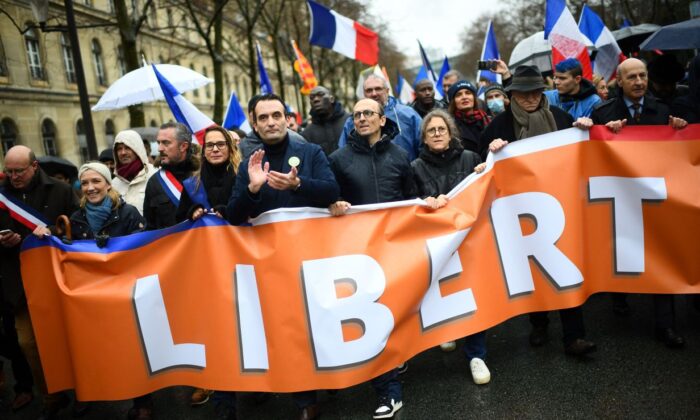 French party "Les Patriotes" leader Florian Philippot and lawyer Fabrice di Vizio march during a rally called by his party against the compulsory COVID-19 vaccination and the mandatory use of the health pass, in Paris, on Jan. 8, 2022. (Christophe Archambault/AFP via Getty Images)
WORLD

French authorities said that about 105,000 protesters took to the streets across the country against a draft law that essentially would ban unvaccinated people from public life.

Protesters are demonstrated against French President Emmanuel Macron’s recent comment about people who haven’t received COVID-19 vaccines, saying: “I really want to piss them off. And so we will continue to do so, to the bitter end. That’s the strategy.”

Speaking to Le Parisien, Macron said his government intends to make life as difficult as possible for unvaccinated individuals by tightening curbs on their civil liberties. In recent days, the Omicron COVID-19 variant has rapidly spread across the world, including Europe, and data suggests it easily infects fully vaccinated individuals.

Many French demonstrators on Saturday chanted a variation of Macron’s vulgar remark.

Others carried signs saying, “no to the vaccine pass,” a reference to Macron’s legislative push to require proof of vaccination to enter venues such as cafes, bars, and museums.

TV images showed skirmishes between protesters and police at one site. Protesters also rallied through the streets in Marseille, Nantes, and Le Mans among other cities.

“[Macron’s remarks] were the last straw. We are not irresponsible,” said hospital administrator Virginie Houget, who has avoided a mandatory vaccine order for health workers because she caught COVID-19 late last year. Studies have demonstrated that a prior COVID-19 infection confers protection against future infections, although it is rarely mentioned by public health officials who instead promote vaccinations.

With three months before a presidential election, some analysts have noted that Macron’s blunt language appeared to be calculated and designed to garner support among pro-vaccine voters.

The protesters accuse Macron of trampling on their freedoms and treating citizens unequally. People in France already have to show either proof of vaccination or a negative test to enter restaurants and bars and use inter-regional trains.

“I want him to piss off drug dealers and criminals, not the average person,” said one 55-year-old protester who requested anonymity because he runs a business.

Despite surging Omicron infections, the government wants to drop the test option. France is one of the most highly vaccinated countries in the world, with more than 90 percent of people aged 12 and older being fully vaccinated.

During a protest Saturday, right-wing presidential candidate Florian Philippot said that “every vaccinated person is a future non-vaccinated person” because of booster shot mandates that are increasingly being employed across the world. “Every French person is in the crosshairs of the liberticidal madness of Macron the madman,” he added.

Police in Germany told news outlets that about 16,000 people took to the streets in Hamburg to protest against the German government’s increasingly tight COVID-19 restrictions. Germany is considering imposing a general COVID-19 vaccine mandate for everyone who is eligible, including children.