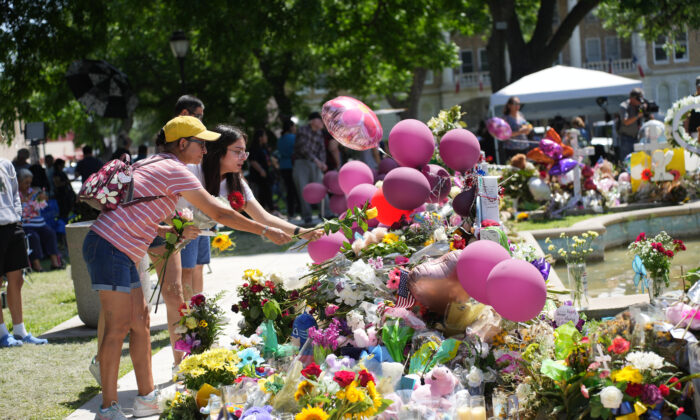 People place flowers at a makeshift memorial for the 21 victims of an elementary school mass shooting in the town square in Uvalde, Texas, on May 29, 2022. (Charlotte Cuthbertson/The Epoch Times)
US News

UVALDE, Texas—Texans who visited Uvalde—the site of a mass shooting that left 21 dead last week—signaled they had mixed feelings about President Joe Biden’s visit to the town.

On May 29, Biden and First Lady Jill Biden visited a makeshift memorial near Robb Elementary School in Uvalde. The White House said he would meet with families and wouldn’t give a public speech.

Hundreds of locals and visitors slowly circled the makeshift memorial in Uvalde’s town square on May 29. A somber pall hung over the grassy square, shaded by giant trees. The fountain had become the centerpiece of the memorial, with white crosses bearing the names of each victim surrounding it. Mounds of flowers, kids’ toys, messages, and candles hugged each cross.

At one point, as Biden was making a public appearance, he suggested that gun control measures could be on the table. A bystander yelled: “Do something,” to which Biden replied, “We will.”

Raul Nolasco, a resident of Uvalde and brother of Uvalde County Sheriff Ruben Nolasco, told The Epoch Times that he pins the blame on a decline in moral standards.

“The hardest part is to see is the breakdown of our culture. And life is not the same anymore. The change in our society is getting worse,” he said. “As we all can see, it’s not going in the right direction.

“This happened in a small town where you will never, ever, ever think that something like this could happen,” said Nolasco, who used to work at Uvalde High School as its truancy officer.

When asked if he had any feelings about Biden visiting Uvalde, Nolasco looked at his watch and said, “What time does he leave?”

“Who’s raising the kids now?” he said. “So they go to gangs, play video [games] … it’s not a healthy lifestyle. It’s not conducive to anything good.”

Dallas resident Alex Alvarado was vacationing with his wife in San Antonio, and they decided to drive the 90 miles to Uvalde for the day to pay their respects.

“I have three daughters. ​​As a parent, I feel for the parents of those kids,” Alvarado told The Epoch Times on May 29. “So I’m here to show support, that they’re not alone. And anything they need as a citizen of this great country, I’m here to support.

“I have a deep feeling, I can’t explain it. I can’t imagine what those parents are going through. Grief, sorrow, sadness—I mean, this shouldn’t have happened.”

Alvarado said he didn’t know the details of Biden’s visit to Uvalde, but said it was good he planned to meet with the families of the victims.

“I’m not against Biden, but I have mixed feelings on him, too,” Alvarado said. “It’s not like he can take a magic wand and fix everything.”

Victor Gonzalez drove 650 miles to Uvalde from Benton, Arkansas. He set up a grill at the Tractor Supply store on May 28 and cooked free hamburgers and hotdogs until the food ran out.

Gonzalez said it was important for him to come, “because as a human being if you don’t feel sorrow and sadness in your heart, there’s something wrong with you.” He said the food for Uvalde had been donated by Performance Food Group in Little Rock.

He wasn’t enthusiastic about Biden’s visit.

“I see a lot of people coming together.”

Alyssa Barrientos, 20, stopped at each cross and laid a flower, tears streaming down her face.

“I just said that I’m sorry that this happened. It should not have happened. I was just saying that the politicians and the presidents of the future, they should resolve this—this problem in our country,” she recounted the contents of her letter.

“I heard that he’s going to talk to the families. I hope that something is done,” she said. “Gun reform needs to happen. For sure. I don’t think anybody needs to own an AR-15.”

“It’s crazy this happened. From the time when Columbine happened to now, it’s been so many years and nothing has been done. So it’s just a surreal feeling.”