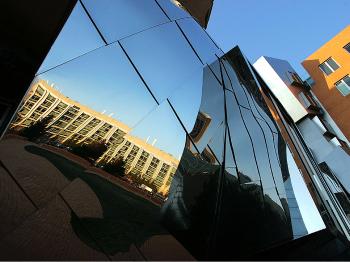 MIT and Other US Universities Seek Sustainability on Campus

By Annie Wu
FONT BFONT SText size
Print
Massachusetts Institute of Technology (MIT) announced their new ambitious plan to cut their electricity use by 15 percent in three years, in addition to receiving two awards from the city of Cambridge last month for their sustainable energy projects. MIT joins a growing national movement to research and develop more energy efficient alternatives in a rapidly developing world faced with limited resources.

MIT and Massachusetts electric and gas utility company, NSTAR will be working together to create new policies and programs involving “substantial student, faculty, and staff engagement,” as well as new technologies, said MIT in a news report. Called “MIT Efficiency Forward,” the project aims at saving up to 34 million kilowatt-hours. NSTAR will help MIT make renovations designed to conserve energy, including heating, light fixtures, air conditioning, and laboratory improvements. The academic institution’s own MIT Energy Initiative has a Campus Energy Task Force that will create campaigns to encourage students to reduce energy consumption. The total savings from this project was estimated at $50 million.

Two GoGreen awards were presented to MIT for their alternative transportation program and storm water management system at the Stata Center. MIT provided cyclists with maintenance stations, showers, and storage facilities, encouraging environmentally-friendly commuting. The storm water system was able to collect 50,000 gallons of rainwater that was reused for toilet flushing and irrigation.

Maintaining acres of buildings and facilities takes a considerable amount of energy, especially when housing large numbers of students. But many colleges and universities across the nation are taking the initiative to develop and promote sustainable energy projects on campus. Harvard University’s Office For Sustainability, for example, announced its goal of reducing the university’s greenhouse gas emissions by 30 percent by 2016. On its website, Harvard reported that from fiscal year 2006 to fiscal year 2009, they achieved a 7 percent overall reduction in greenhouse gas emissions.

The Association of University Leaders for a Sustainable Future (ULSF), whose mission is to “support sustainability as a critical focus of teaching, research, operations, and outreach at colleges and universities worldwide,” lists over 90 institutions of higher education in the United States with campus sustainability programs and committees. Many of these student groups initiate projects to encourage students to conserve energy and be aware of their environmental impact. Such projects include offering locally-grown food in dining halls, organizing recycling campaigns, holding talks and panel discussions on sustainability, and composting food waste.

For many academic institutions, getting the United States Green Building Council’s Leadership in Energy and Environmental Design (LEED) certification is an indication of sustainable development. This nonprofit, third-party organization rates buildings based on their cost and energy efficiency during construction. The certification system works on a 100 point scale and also rewards 10 bonus points. The highest rating is platinum for those with 80 and above points, followed by gold and silver.

At Columbia University, Faculty House, a meeting and event space, was awarded a gold LEED certification. At its affiliated women’s college across the street, the newly constructed Diana Center at Barnard College has a silver LEED rating. The center has an insulated frit glass (a type of chemically complex glass) and metal panel exterior to prevent heat from escaping.

Although LEED certification is sought after by academic institutions, it has been questioned for its accuracy. For example, at Yale University, the Malone Engineering Center, which received a gold LEED rating, was often kept fully lit even late at night, reported Yale Daily News in 2008. Kroon Hall, which was being built at the time, sought a platinum rating but was faced with a dilemma when its locally harvested forests had to be trucked to Vermont for inspection and preparation by a certified mill.