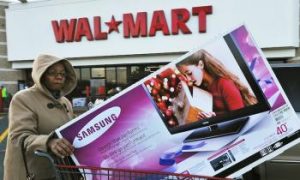 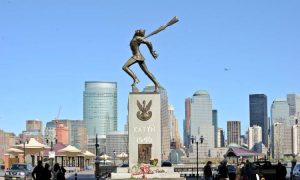 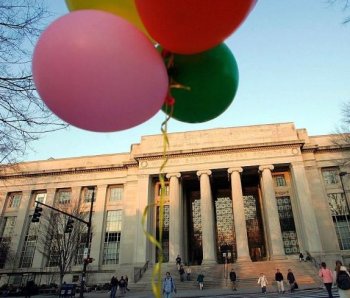 SESQUICENTENNIAL: Balloons float in front of The Rogers Building on the campus of the Massachusetts Institute of Technology (MIT) in Cambridge, Mass., in this file photo. This year marks the 150th anniversary of the school's founding. (oe Raedle/Getty Images)
US

By Michael Tsang
Print
The Massachusetts Institute of Technology is celebrating its Sesquicentennial with a packed roster of academic events, programs, symposiums, and an array of techno-art fests for 150 days from Jan. 7 to June 5.

Distinguished for 150 years for the solid achievements in the forefront of applied and pure sciences, MIT has at times transformed itself, the nation, and even the world for meeting some of the United States greatest challenges—World War II and the Cold War.

The 150th celebration is to honor its past and at the same time envision its future. MIT has had 76 Nobel laureates, 50 National Medal of Science recipients, and 35 MacArthur Fellows who are current or previous affiliates of the university. If revenues of companies founded by MIT alumni were aggregated it would stand as the 17th largest economy in the world.

Among the luminaries of MIT’s past were Robert Taylor, who in 1892 was the first African-American graduate who then became a prominent architect and brought down racial barriers.

There was also Ellen Swallow Richards, MIT’s first female graduate and faculty member who in 1887 received a commission from the Massachusetts State Board of Health to survey the state’s drinking water to address industrial contamination—the first such study in America and the first in terms of contributing to public health. Ellen later was a pioneer in the fields of ecology and home economics, and opened the door for women in science.

Vannevar Bush, former professor and dean of the School of Engineering, headed President Roosevelt’s newly created Office of Scientific Research and Development (OSRD) in 1942, which oversaw the United State’s wartime scientific research and gave America its critical military edge in World War II. People called his role the first presidential science adviser and the OSRD the predecessor to the current National Science Foundation.

MIT today is not only an institution recognized for excellence in research, innovation, and education; over time it has evolved such that the school's disciplines and curriculum have become some of the most diverse and innovative found in any university.

From science and engineering to biotechnology and cancer research; computation; exploration of earth, air, ocean, and space; brains, minds, and machines; to economics, finance, and management; linguistics; humanities; political science, and foreign policies; to architecture and the arts. The diversity and constant quest for excellence reflects what it takes to be a pre-eminent institution, and to meet the challenges arising from a fast-changing and complex world.

The sesquicentennial academic forums and symposiums will draw thousands from the community of academics and scholars from around the world. It will raise and explore large, synthetic questions crossing multiple disciplines that epitomize the current cross-disciplinary nature of MIT, but in no way reflect the full range of research and activities that are on campus. All symposium and scientific events are open to the public.

A must-see exhibit is at the MIT museum showcasing 150 objects and stories unique to MIT’s culture. “The MIT150 Exhibition brings together a unique collection of 150 artifacts—many of them never seen in public before—that evoke the life and work of the institute,” John Durant, director of the MIT Museum said on its website, “If you’re interested in MIT, you can’t fail to be interested in the MIT150 Exhibition.”

The centerpiece of the sesquicentennial, as indicated in the MIT website, will be the Next Century Convocation ceremony held on MIT’s actual anniversary of April 10—the day the governor of Massachusetts signed MIT’s charter in 1861—in the Boston Convention and Events Center.

The formal event will honor some of the scholarly achievements of MIT’s faculty and students. Invited speakers will discuss the “habits of mind” fostered by MIT research and education—integrity, diligence, service, social responsibility, and creativity—while stressing MIT’s moral and social obligation not only to advance knowledge through research, but also to share it.

Among final events of the five-month long celebration will be the Commencement Exercises for the Class of 2011, which has been designated as MIT’s Sesquicentennial Class.