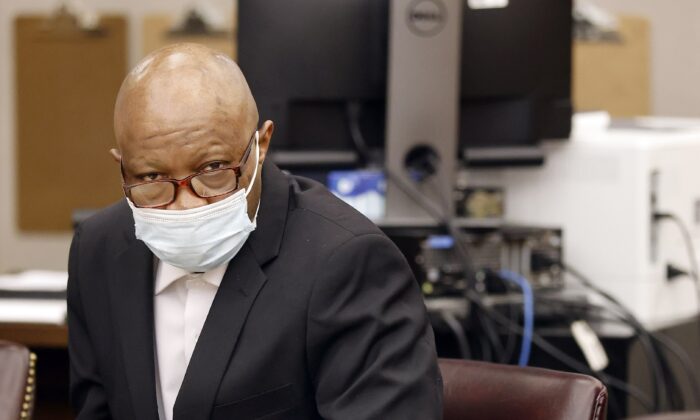 Defendant Billy Chemirmir listens to motions and language being discussed and sent to the jury after one juror is hanging up the deliberations in his capital murder trial at the Frank Crowley Courts Building in Dallas, on Nov. 19, 2021. (Tom Fox/The Dallas Morning News via AP)
Crime and Incidents

Mistrial Declared in Case of Man Charged in 18 Texas Deaths

DALLAS—A Texas judge declared a mistrial Friday in the first murder case against a man charged with killing 18 older women in the Dallas area over a two-year span.

Judge Raquel Jones issued the ruling when a jury deadlocked after deliberating since Thursday afternoon in the capital murder case charging Billy Chemirmir with the death of 81-year-old Lu Thi Harris.

The mistrial raises questions about how prosecutors will proceed with the cases against Chemirmir, who authorities have accused of being a prolific killer preying on the elderly. The Dallas County District Attorney’s office did not immediately respond to a request for comment.

In a series of notes to the court Friday, the 12 jurors said they were “hopelessly deadlocked 11 to one” over the case. It was not clear what verdict the majority of jurors supported. Jones initially resisted declaring a mistrial, repeatedly ordering the jury to continue deliberation.

After the decision, family of the women Chemirmir is accused of killing spoke outside the courtroom, which they’d been prohibited from entering during the trial as a COVID-19 precaution. They expressed frustration with the mistrial, anger with the juror they saw as a hold out against conviction and hope for a different outcome in another case against Chemirmir in Fort Worth.

Chemirmir’s attorneys rested their case without calling any witnesses or presenting evidence, and the 48-year-old didn’t testify in his own defense. They dismissed the evidence against their client as “quantity over quality” and asserted that prosecutors had not proved Chemirmir’s guilt beyond a reasonable doubt.

Chemirmir was arrested in March 2018 after 91-year-old Mary Annis Bartel said a man forced his way into her apartment at an independent living community for seniors in the Dallas suburb of Plano.

When police tracked Chemirmir to his nearby apartment following the attack on Bartel, he was holding jewelry and cash. Documents in a large red jewelry box police say he had just thrown away led them to a Dallas home, where Harris was dead in her bedroom, lipstick smeared on her pillow.

After his arrest, authorities announced they’d begin reviewing hundreds of deaths, signaling the possibility that a serial killer had been stalking older people. Over the following years, the number of people Chemirmir was accused of killing grew.

For the families of most of the women he’s been charged with killing, they learned months or years after their loved one’s death that authorities believed they’d been killed. Those families had puzzled over the suddenness of their older but otherwise healthy and active loved ones’ deaths, and in many cases, filed police reports when jewelry was found missing after their deaths.

Bartel died in 2020 but jurors heard from her during the trial through a taped deposition. She said she did not remember details of the appearance of the man who attacked her but said she knew she was in mortal danger the minute she opened her door.

“My eyes were just fixated on these green rubber gloves that I saw. … I knew instantly when I saw those two green rubber gloves, number one, I should not have opened the door, number two, my life was in grave danger,” Bartel said on the video.

She said that she tried to push the door shut but was overpowered. “He said: ‘Don’t fight me, lie on the bed,’” Bartel said.

Bartel described a pillow being smashed into her face and her attacker “using all his weight to keep me from breathing.” Chemirmir was charged with attempted capital murder in the attack on Bartel.

Jurors saw surveillance video from a Walmart showing that Harris and Chemirmir were at the store at the same time, just hours before she was found dead.

Most of the victims were killed at independent living communities for older people, where Chemirmir allegedly forced his way into apartments or posed as a handyman. He’s also accused of killing women in private homes, including the widow of a man he had cared for in his job as an at-home caregiver.

Harris’ son-in-law, Richard Rinehart, testified that the jewelry box found in the trash when Chemirmir was arrested belonged to his mother-in-law, as did numerous pieces of jewelry officers found then.

Evidence presented showed that Chemirmir was also in possession of numerous $2 bills at the time, and Rinehart testified that his mother-in-law loved giving them as gifts.

Police have also said that a set of keys found with Chemirmir when he was arrested opened the front doors of Harris’ home.

Jurors also heard about the killing of of 87-year-old Mary Brooks, who was found dead in her Richardson home in January 2018. Hers was one of the 18 Chemirmir has been charged with.

Prosecutor Glen Fitzmartin said that Brooks’ death had originally been called a natural death, but after an investigation following the arrest of Chemirmir, the medical examiner changed the cause of death to homicide.

Fitzmartin said that Chemirmir also followed Brooks home from the same Walmart Harris was at before her death. Her daughter, Ann Brooks, testified that after her mother’s death, her mother’s safe was missing, as was most of her jewelry, including wedding rings and a coral necklace she always wore.

Chemirmir, who immigrated to the U.S. from Kenya, became a permanent U.S. resident in 2007.