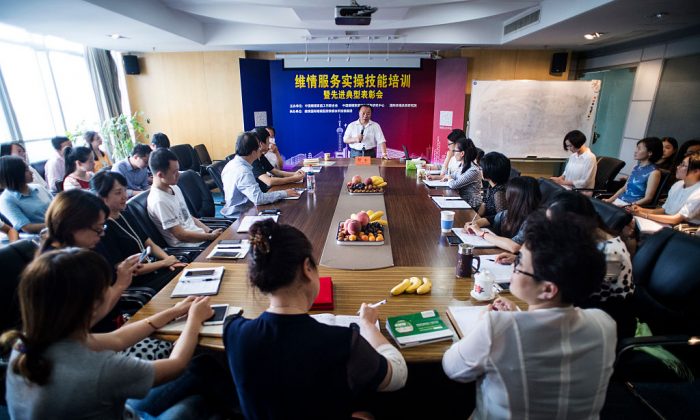 Shu Xin, the head of Weiqing, a company that offers a team of “mistress hunters,” speaks to his colleagues during a meeting in Shanghai on July 8, 2016. (Johannes Eisele/AFP/Getty Images)
Social Issues

Recently a photo of a classroom has generated heated discussion on Chinese social media. It is not your typical class: this teaches mistresses and potential mistresses how to perfect their art of seduction. On the screen was a catchy slogan.

“There is not a family that cannot be torn apart. It is only you who doesn’t want to change. If you don’t change, men will. After all the hard work, do you want to stay the same forever?”

Information on the screen revealed that the class is available in Beijing and Shanghai. The tuition costs 29,800 yuan (about US$4,487), though the duration of the class is unknown. According to the Hong Kong newspaper Oriental Daily, the image was first posted on the “Whistleblowing Commune” Facebook page.

These kind of mistress classes are not something new, according to the Hong Kong newspaper Headline Daily. Classes are often offered in big cities. What drives women to become mistresses is the existence of the Chinese regime’s hukou, or household registration system, which is often likened to a caste system that favors urban over rural residents in many aspects of life, from access to education to employment opportunities.

Rural young women, after studying or working in the cities, prefer to marry someone in the city so they can become entitled to a new city hukou, and enjoy government services and benefits that are unlikely to be available in rural areas.

Similarly, the problem with migrant workers—often blamed for rising crime rates and unemployment in the cities—is also the result of the hukou system. They are forced to leave their children at their rural homes with no one to care for them, resulting in yet another social problem: left-behind children.

According to the Beijing municipal government website, a rural woman who is married to a man with a Beijing city hukou can apply for the city hukou once she is over the age of 45 and has been married for 10 years.

By going to these mistress classes, many young women believe they can change their lives for the better after they successfully break up a previous marriage, according to Headline Daily.

China has seen a steady increase in its national divorce rate. According to data from China’s Ministry of Civil Affairs, the divorce rate has increased from 1.85 percent in 2009, to 3 percent in 2016, with 3.486 million couples filing for divorce.

In response to the mistress threat, two new types of businesses have sprung up in China—the hiring of mistress dispellers and classes on how to be a good wife.

The Chinese news portal Sohu published a story on a 14-day class where wives lived with experts in seclusion at a villa, where they learned in simulated scenarios to perfect their habits and behavior in order to create a happy and harmonious environment at home. The class cost 100,000 yuan (about US$15,056), and wives need to have a minimum of 10 million yuan (about $1.5 million) in family assets to be eligible for enrollment.

Meanwhile, the Chinese state-run news website The Paper reported on Ms. Wang, who enrolled in a how-to-be-a-wife class in Shanghai because her husband was having an affair with a flight stewardess. She shared how she had learned lessons on how to be a better person and do house chores in order to win back her husband.

The high divorce rate can be attributed to an upward trend in the number of married Chinese men having extramarital affairs. This social trend has been encouraged by the sexual corruption commonly found among Chinese Communist Party (CCP) officials, which began during Deng Xiaoping’s era, but flourished under Jiang Zemin, who was the leader of China from 1989 to 2002.

Chinese state-run companies, including the Chinese regime mouthpiece CCTV and telecommunications giant China Unicom, have also been hit with sex scandals. Li Dongsheng, the former vice-minister of the Ministry of Public Security, had offered CCTV female anchors as bribery gifts to high-ranking party officials. In 2015, the CCP’s anti-corruption watchdog, the Central Commission for Discipline Inspection, released a report on rampant problems of trading sex for political favors at China Unicom.

Hiring a mistress dispeller is often the better solution when women are faced with a cheating husband, according to Chinese news portal NetEase. Lei Bin, who owns a mistress dispelling business workshop, shared how he once successfully broke up a relationship between a mistress and a married man. These services can cost up to 500,000 yuan (about US$75,000), and can vary in strategy from paying off the mistress, to buying her gifts and vacation trips.

After the successful break-up, Lei said he arranged for the part-time actor to slowly remove himself from the mistress’s life and eventually disappear.