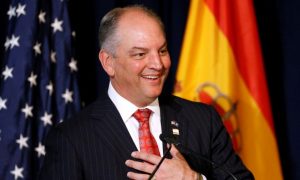 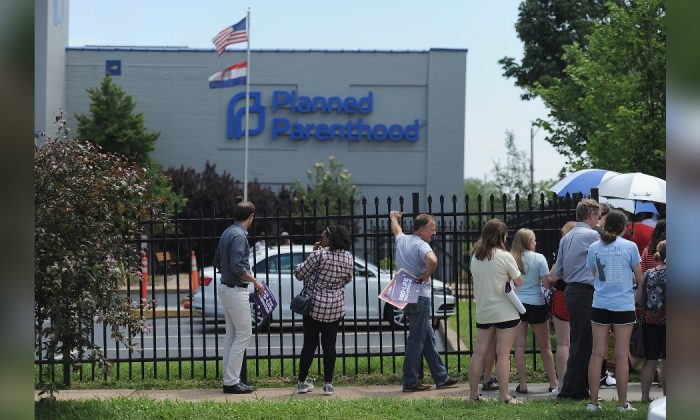 A group of demonstrators gather during a pro-life rally outside the Planned Parenthood Reproductive Health Center in St. Louis, Missouri, on June 4, 2019. (Michael B. Thomas/Getty Images)
US News

Missouri’s last remaining abortion clinic in St. Louis lost its license to perform abortions on Friday, June 21 over patient safety concerns. But it will remain open, at least temporarily, under a judge’s order on the same day.

St. Louis Circuit Judge Michael Stelzer said that Reproductive Health Services (RHS) Planned Parenthood’s St. Louis clinic can for now continue to carry out abortions, at least until he issues a final ruling outlining the next steps. He offered no timetable for that final ruling.

Stelzer—an appointee of former Gov. Jay Nixon, a Democrat—said during a brief hearing on June 21 that a preliminary injunction he previously issued that keeps the clinic open would remain in place until then.

The Republican-led Missouri Department of Health and Human Services (DHSS) had refused to renew the St. Louis clinic’s abortion license which was set to expire May 31. Planned Parenthood filed a lawsuit around late May after finding out that the DHSS refused to renew the clinic’s license.

Court documents indicated that state health officials did not renew the license because they were conducting an investigation into the abortion clinic, but had not yet been able to conclude the investigation, because they were unable to interview seven of the clinic’s physicians over “potential deficient practices,” Reuters reported.

Stelzer had ruled earlier in June that the state needed to be more definitive and set the June 21 deadline for it to either approve or deny the abortion license.

On June 21 the health department informed the clinic that its abortion license was denied, due to a number of patient safety concerns. A public announcement outlining the state’s rationale for its decision cited “numerous serious and extensive unresolved deficiencies” at the abortion clinic. In part, it reads:

“Due to [the clinic’s] unprecedented lack of cooperation, failure to meet basic standards of patient care, and refusal to comply with state law and regulations protecting women’s health and safety that resulted in numerous serious and extensive unresolved deficiencies including multiple that involved life-threatening conditions for patients, their license renewal application has been denied.”

Missouri DHSS Director, Randall Williams, said on June 21 in a press briefing that the DHSS’s decision came after an inspection in March showed that there were complications in four abortions at the clinic. He said the department issued a Statement of Deficiencies (pdf) to Planned Parenthood outlining the department’s concerns.

The statement said that the clinic failed to provide standard patient care, had questionable quality control procedures, and failed to obtain informed consent from patients, among other concerns.

It noted that in three out of the four abortions, the women had to have follow-up abortions after their first abortion failed. One woman had developed sepsis after a follow-up surgical abortion. Williams pointed out on June 21 that another one of the women had to endure three abortions in three days for the same pregnancy.

In a fourth case, the woman did not have to undergo a follow-up abortion, but suffered life-threatening complications and had to be rushed to the hospital with heavy bleeding after she underwent a therapeutic abortion at 21 weeks of pregnancy. She was described as “critically-ill” in hospital records, according to the DHSS’s statement.

Operation Rescue, a pro-life group, reported that the DHSS had issued subpoenas to seven physicians and two staffers at the clinic. The subpoenas were “quashed by Judge Stelzer,” according to the group. Two people, Medical Director David Eisenberg and staff physician Colleen McNicholas, did agree to speak with investigators, while the other five physicians fired attorneys and refused to be interviewed.

According to Fox News, RHS Planned Parenthood indicated to the DHSS that it cannot force the remaining involved physicians who investigators sought to interview to cooperate, because they are not staffers, and some no longer work at the clinic.

Missouri Gov. Mike Parson signed a bill into law on May 24 banning most abortions in the state, making it illegal to get an abortion if a heartbeat is detected in the unborn child—unless the mother’s life is in danger.

If a heartbeat is not detected, abortions are legal if completed within 96 hours of the detection test. The bill also prohibits “selective abortions due to sex, race, or a diagnosis or potential diagnosis of Down Syndrome.”