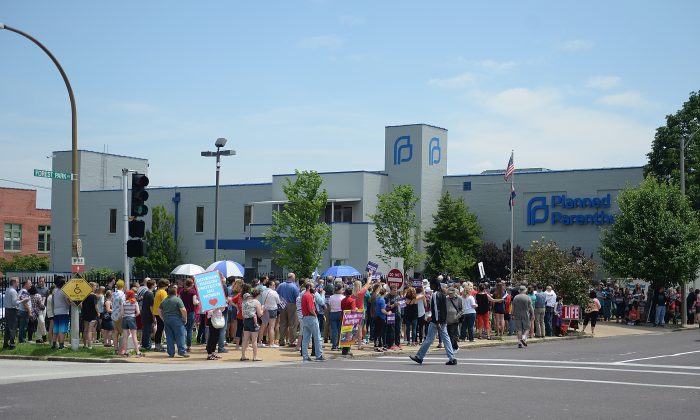 An overall during a pro-life rally outside the Planned Parenthood Reproductive Health Center on June 4, 2019 in St Louis, Missouri. Michael B. Thomas/Getty Images
Viewpoints

The Associated Press reported that a ruling on whether “the state health department can revoke the license” of the clinic, given its multiple alleged health and safety violations, is expected around February.

Whether this clinic is the last surviving abortion clinic in the United States or one of 500 in Missouri is irrelevant. The fact that the Missouri Department of Health and Senior Services (DHSS) found the clinic had “30 deficient practices” should be proof enough that it needs to be shut.

Keeping it open in the name of Roe v. Wade is a clear demonstration of indifference for women’s health, the very thing that abortion advocates say drives their campaign.

The DHSS didn’t renew the license of the Planned Parenthood facility in May, because it has had four failed abortions and other health and safety violations. The clinic has only remained open and operating because of a court injunction.

In the hearing, testimony showed DHSS officials had tried to investigate potential legal violations concerning the reporting of failed abortions at the clinic. According to National Review, officials found 67 instances in which the same woman had multiple abortions during the same year and at least one case in which Planned Parenthood failed to report a failed abortion, which is illegal.

The mainstream media reported that the takeaway from this hearing was that officials from DHSS were tracking patients’ periods. Not only is that untrue, the most shocking thing in my mind is that, despite the number of things that have gone wrong in this Planned Parenthood facility, there was still a hearing to determine whether it should remain open.

The Kansas City Star reported that it was these complications, discovered during a March inspection, that prompted the DHSS to refuse to renew Planned Parenthood’s license, after the department was unable to interview the doctors who had performed the abortions.

“It makes a very difficult job for our regulators—in fact unprecedented—to investigate the quality of care if the people who took care of the patient won’t talk to them,” Williams said at a press conference.

As abortion has become more polarized than ever, and the number of abortions has decreased, abortion advocates have often focused on supporting Planned Parenthood in the name of helping to preserve women’s health. Turns out, in this Planned Parenthood clinic in Missouri, even this standard may not be being met, yet state officials can’t even shut the clinic down, hard as they try. If this clinic is closed, Missouri would be the only state in the nation without an abortion clinic.

Rather than grant an injunction to maintain the status quo and keep open a potentially shoddy clinic, it seems this clinic should be shut in order to protect women’s health. If then Planned Parenthood wants to reopen it, because, after all, abortion is a “right,” it should be willing—eager, in fact—to abide by standard safety regulations.

If Democrats really cared about women’s health, as they say they do, they would encourage even the Planned Parenthood clinics open in the United States to be as vigilant about following health and safety codes as any other licensed facility. Instead, the clinics fight to remain open by the skin of their teeth under the protection of Roe. That’s a low standard, if I’ve ever seen one.