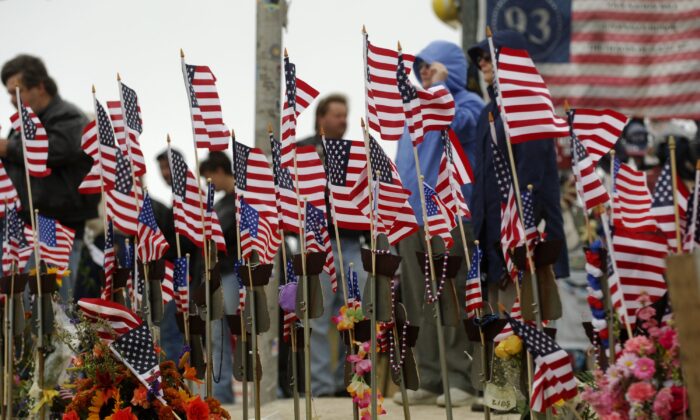 American flags fly at a memorial site for the Sept. 11, 2001, terror attacks in a file photograph. (Jeff Swensen/Getty Images)
US News

A university in Missouri is denouncing the removal of flags commemorating victims of the 9/11 terror attacks, but it’s not clear if the student identified as the one who removed the flags will be disciplined.

The Young America’s Foundation placed nearly 3,000 flags in the ground at Washington University in St. Louis to commemorate the victims of the terror attacks. But video footage from Sept. 11 shows a man carrying trash bags filled with the flags after he had removed them from where they had been placed.

Fadel Alkilani was later identified as the man from the footage. He’s the student union vice president of finance, the school’s paper reported.

Alkilani admitted to removing the flags in social media posts that he later deleted. In one, he wrote that he intended to “protest against American imperialism and the 900,000 lives lost as a result of post 9/11 war.”

Alkilani later took to Instagram to write a lengthy statement, stating that he “had no intention of removing the flags from the Mudd Field area, and my full protest did not have the chance to be actualized.”

“My planned protest was to place the bags of flags on Mudd field, along with various statistics explaining the human cost of 9/11 in the past 20 years,” he said.

Alkilani indicated that he’s under investigation for possibly violating the university’s code of conduct, although he maintains that he didn’t do so.

The university, in an initial statement on Sept. 11, said it was “disappointed to learn about the disruption to the 9/11 display on Mudd Field,” and that “we condemn the interference.”

“I want to make it very clear that, as an institution, we find the actions of this student to be reprehensible,” Chancellor Andrew Martin wrote on Sept. 12 to students and teachers.

“The removal of the flags impeded the ability of individuals to commemorate the lives lost on 9/11 and to process the trauma of that day. This act was seen as a personal affront by many, at WashU and beyond, and as an affront to the ideals of our institution.”

Martin confirmed that the incident is being investigated.

The school didn’t respond to a request for comment by press time.

Washington University College Republicans President Nick Rodriguez told the student paper that Alkilani’s actions “made a mockery of one of the most somber days in American history” and called for his removal from the student union.

“What does it say to be a top American institution, and have yourself represented by a student leader who has no respect for property, campus traditions, or the remembrance of thousands of lost lives?” he said.

Reagan Steirn, another student, described herself as “livid” about Alkilani removing the flags.

“With a leadership role, someone doing those actions and showing his disrespect will just allow other students on campus to do the same thing, when in this situation, it’s just not OK to do that,” she said.