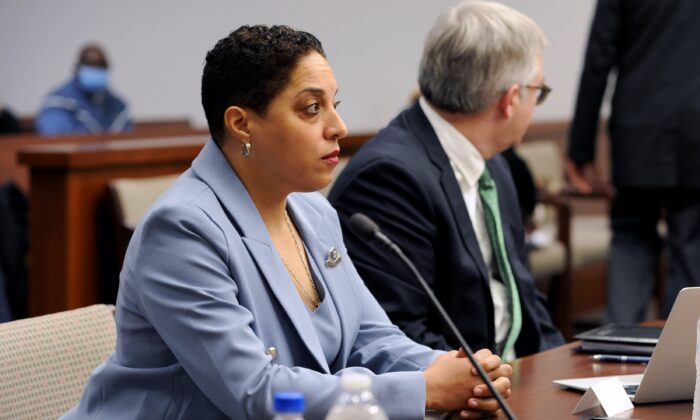 Gardner is one of several prosecutors—accused of being soft on crime—in major population centers throughout the country elected with the support of left-wing billionaire George Soros.

Critics blame rising crime in part on the policies of these prosecutors.

The brief court order dated Aug. 30 was signed by Chief Justice Paul Wilson and states that the court found that Gardner violated three provisions of the Rules of Professional Conduct, “should be disciplined,” and “is hereby reprimanded” and fined $750.

The court ratified an agreement from April between Gardner and the Missouri Office of Disciplinary Counsel and accepted an advisory counsel’s decision that disbarring or suspending her from the practice of law wasn’t justified.

Gardner admitted that she failed to hand over documents as required to Greitens’s attorneys in a criminal case that led to the governor’s resignation in June 2018.

Greitens was charged with tampering with data in a campaign finance-related case. When he resigned, Gardner dropped the charges.

The agreement stipulated that Gardner’s behavior “was negligent or perhaps reckless, but not intentional” and urged a reprimand but left the final decision up to the Supreme Court of Missouri.

Gardner told a disciplinary panel earlier this year that she made mistakes because the case moved quickly.

“I’m pleased that our state’s highest court and disciplinary counsel has recognized that the ethics disciplinary process should not be weaponized for political gain,” Gardner reportedly said in a statement after the court rendered its decision. “I look forward to continuing the critical work of creating a safer, fairer, and just St. Louis.”

In another case Gardner pursued against the then-governor, Greitens had an affair with his hairdresser. The woman claimed that he took a compromising photograph and blackmailed her over it, threatening to use it if she spoke of their relationship.

Gardner investigated, which led to Greitens’s indictment for felony-level invasion of privacy. Greitens claimed that he was the victim of a political vendetta.

After jury selection got underway, the court ordered Gardner to testify about her conduct in the case. Instead, Gardner withdrew the charge.

Greitens sought the Republican nomination for an open Missouri U.S. Senate seat and came in third in the race on Aug. 2. Eric Schmitt, the state’s attorney general, secured the nomination.

Gardner has a history of prosecutorial misconduct and is known for making false accusations.

She previously accused local police of racism and filed a federal lawsuit against the city, its police unions, and a special prosecutor, alleging violations of the Ku Klux Klan Act.

She claimed that the defendants participated in a “racially motivated conspiracy to deny the civil rights of racial minorities.”

U.S. District Judge John A. Ross, an Obama appointee, dismissed the suit in September 2020, finding that it was “nothing more than a compilation of personal slights—none of which rise to a legal cause of action.”

In December 2020, Circuit Judge Thomas Clark II removed her from the case of Mark and Patricia McCloskey, the couple that gained folk hero status in the conservative movement for wielding guns outside of their St. Louis home earlier that year to deter a group of trespassing left-wing protesters, including Black Lives Matter activists.

Gardner used the incident in inflammatory campaign fundraising emails. Clark ruled that Gardner’s behavior raised “the appearance of impropriety” and “jeopardized the defendants’ right to a fair trial.” Gardner appealed the ruling twice and lost.

The McCloskeys were charged with felony-level weapons offenses but plea-bargained the charges down to misdemeanors.

They were pardoned in July 2021 by Missouri Gov. Mike Parson, a Republican.

Like Greitens, Mark McCloskey ran for the Republican nod for the U.S. Senate. McCloskey finished fifth in the race.