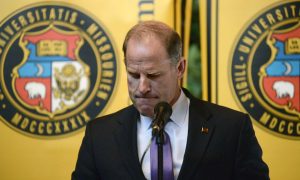 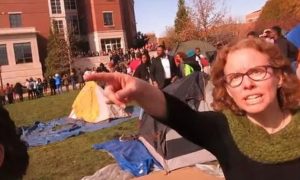 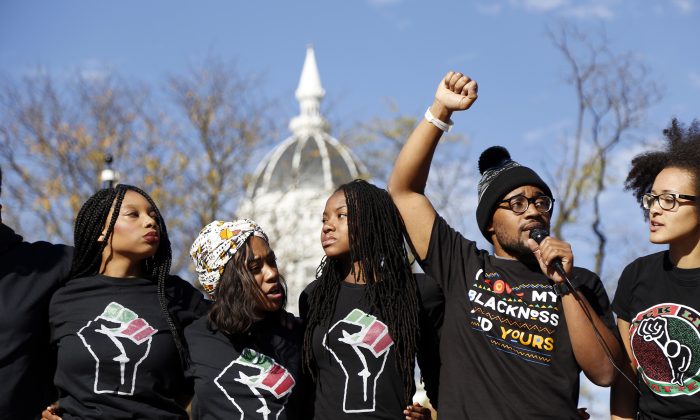 COLUMBIA, Mo.—The racial tension at the heart of the protests that led two top University of Missouri administrators to resign intensified at the Columbia campus after the arrest of a white college student suspected of posting online threats to shoot black students and faculty.

Hunter M. Park, a 19-year-old sophomore studying computer science at a sister campus in Rolla, was charged Wednesday with making a terrorist threat after his arrest at a residence hall. The school said no weapons were found.

Park, who is enrolled at the Missouri University of Science and Technology, was jailed in Columbia, about 75 miles to the northwest. Because the county courts were closed for Veterans Day, Park was not expected to appear before a judge until at least Thursday.

The author of the posts, which showed up Tuesday on the anonymous location-based messaging app YikYak and other social media, threatened to “shoot every black person I see.” The posts followed the resignations on Monday of the University of Missouri system president and the chancellor of its flagship campus in Columbia.

Another threat said: “Some of you are alright. Don’t go to campus tomorrow.” The message seemed to echo one that appeared on the website 4chan — a forum where racist and misogynistic comments are common — ahead of the deadly campus shooting at an Oregon community college last month.

A message left on his mother’s cellphone was not returned. And an AP reporter got no answer when he knocked on the door of the family’s home in the affluent St. Louis suburb of Lake St. Louis.

A second student was arrested at Northwest Missouri State University in Maryville for allegedly posting a threat on YikYak that read, “I’m gonna shoot any black people tomorrow, so be ready.” Northwest Missouri State spokesman Mark Hornickel told several media outlets that authorities hadn’t linked the incident to threats at the University of Missouri’s Columbia campus.

Authorities also are investigating another threat on YikYak, this one leveled at the Rolla campus by someone saying, “I’m gonna shoot up this school.”

Student foot traffic in Columbia was light as freshman Megan Grazman was on her way to class. Although she said she felt safe, “There’s nobody out. It’s a ghost town. It’s kind of eerie.”

Yixiang Gao, a Chinese student from Shanghai, said he felt safe, but he described the campus climate as “very heavy” on the night the threats emerged.

Also Wednesday, the university said an employee who was among those who clashed with a student photographer during campus protests was placed on administrative leave while her actions are investigated.

Janna Basler is the school’s director of Greek life. The videotaped clash helped fan a debate about the free press. Basler did not return a message seeking comment.

Months of protests culminated in a tumultuous week on the Columbia campus.

Back in September, the student government president reported that people shouted racial slurs at him from a passing pickup truck, galvanizing the protest movement. Last week, a graduate student went on a hunger strike to demand the resignation of university system President Tim Wolfe over his handling of racial complaints.

Then more than 30 members of the Missouri football team refused to practice or play in support of the hunger striker. Those developments came to a head Monday with the resignation of Wolfe and Chancellor R. Bowen Loftin, the top administrator of the Columbia campus.