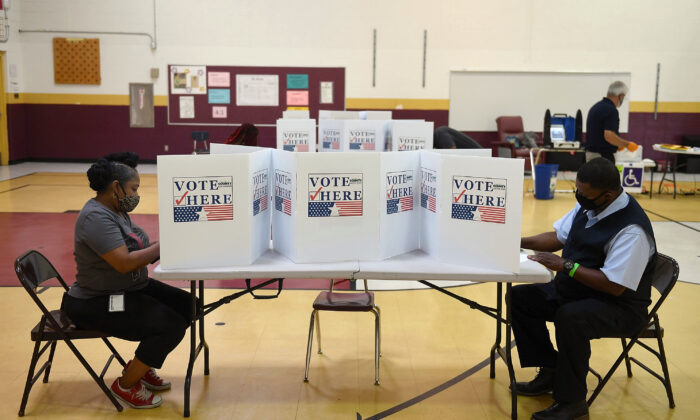 Missouri Gov. Mike Parson signed a new election law on Wednesday that will require a voter to show a photo ID to vote in the coming general election.

The new law, House Bill 1878, requires voters to show one of the following photo IDs at polling sites: nonexpired Missouri driver’s license, nonexpired state nondriver’s license, other documents issued by the state or federal government with a photo and recent confirmable signature, or photo identification issued by the Missouri National Guard, U.S. Armed Forces, or U.S. Department of Veteran Affairs.

A voter who comes to the polling sites without the required photo ID can cast a provisional ballot with a signature on the ballot envelope and a sworn affidavit.

However, the election judges will mark the ballot envelope to indicate that the voter’s identity was not verified.

The voter can either come back to the polling site with a photo ID on the same day or allow the election authority to determine if the ballot is effective by comparing the voter’s signature with one on file with the election agency.

The bill was sponsored by state Rep. John Simmons, a Republican, and passed in the Missouri House and Senate early this year.

It also bans the use of drop boxes to collect absentee ballots, mandates cybersecurity reviews, and prohibits private donations for elections unless it’s personal protective equipment, water, or food for election workers.

It comes amid a renewed national emphasis on election laws. Democrats in many states have sought to expand voter access following widespread mail-in voting during the pandemic-affected 2020 elections, while many Republicans have pursued new election integrity measures that they contend would cut down on the potential for fraud.

Missouri’s measure was backed by Republican Secretary of State Jay Ashcroft, who called it “one of the strongest election laws in the country.”

“It makes sure that it’s easy to vote, it’s harder to cheat, and the people can have trust in the results,” Ashcroft said.

“It seems pretty racist to me to say that the color of skin determines whether or not someone knows how to get an ID,” Ashcroft said Wednesday.

In 2016, Republican lawmakers put on the ballot a constitutional amendment authorizing photo ID that was approved by 63 percent of voters. But lower courts placed a hold on the accompanying law enacting the actual photo ID requirement. In January 2020, the state Supreme Court struck down a “misleading” and “contradictory” provision requiring a sworn statement for voters without a photo ID to cast a regular ballot.

The Associated Press contributed to the Report.