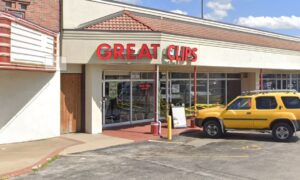 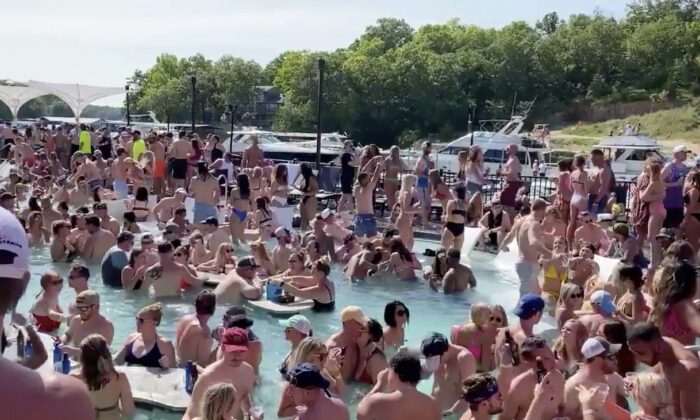 Revelers celebrate Memorial Day weekend at Osage Beach of the Lake of the Ozarks, Mo., on May 23, 2020. (Twitter/Lawler50/via Reuters)
US News

Health officials in Missouri advised a 14-day self-quarantine for anyone who flouted social distancing rules, after images emerged of large crowds gathered at a pool party in the small town of Osage Beach at Lake of the Ozarks, Missouri, over the Memorial Day weekend.

The St. Louis County Public Health Department issued a general travel advisory (pdf) on May 25, calling for “those who ignored protective practices” to self-quarantine for 14 days, or until they receive a negative test result for COVID-19.

Video and photos emerged on social media of a pool party over the Memorial Day weekend called “Zero Ducks Given” at a bar called Backwater Jack’s, where hundreds of people gathered in close proximity. One video was posted on Twitter by KTVK anchor Scott Pasmore, who wrote the accompanying caption, “No COVID concerns at the Lake of the Ozarks.”

“Recent news reports indicate that many people, including those from the St. Louis region, did not follow any protective practices over the holiday weekend,” the health department announced in a statement on May 25. The statement noted that the large crowds “showed no efforts to follow social distancing practices.”

“As a result, many members of the public and employers have asked St. Louis County how to best proceed in safely opening their businesses when social distancing practices are not being followed,” the statement continued.

The St. Louis County Health Department’s travel advisory said that employers “should consider” adding questions related to recent travels and social distancing behaviors when screening their employees for health risks as workers return to their jobs.

“This reckless behavior endangers countless people and risks setting us back substantially from the progress we have made in slowing the spread of COVID-19. I encourage everyone to follow the Department of Public Health advisory to determine a safe path forward in the workplace,” Dr. Sam Page, the county executive, said in the statement.

Businesses in Missouri were allowed to reopen on May 4 as long as people could adhere to strict social distancing and sanitization requirements, according to Gov. Mike Parson. The main requirement involves people keeping six feet away from those who don’t reside in the same household.

John Olivarri, mayor of Osage Beach, told NPR in an interview on May 25 that Parson’s order (pdf) “indicates that the public health department is the one who will be responsible for enforcement … it’s not the responsibility of the city to enforce those orders in accordance with the governor’s guidelines.”

The owner of Backwater Jack’s, Gary Prewitt, prior to the pool party event had told news outlet KSHB that it would try to ensure appropriate social distancing. However, Prewitt noted that staff will not be able to know which individuals are in the same household. “We expect them to [practice social distancing] on their own,” Prewitt said.

Parson said in early May that local officials in the St. Louis area can issue stricter guidelines, noting that cases in the area had yet to trend downward. As of May 25, St. Louis County has reported 386 deaths, and St. Louis city has reported 107 deaths.

The City of St. Louis remains under a stay-at-home order. The order remains in effect until the city’s director of health deems that the threat of the CCP virus “has diminished,” the city announced on April 30.

St. Louis Mayor Lyda Krewson announced on Twitter on May 25 that “too many” people didn’t take “appropriate safety precautions” during celebrations over the Memorial Day weekend at the Lake of the Ozarks. She urged people to stay home for the next 14 days if they were among those who didn’t practice social distancing or wear masks.

Department of Health and Senior Services Director Randall Williams warned on May 25 that “COVID-19 is still here.”

“Social distancing needs to continue to prevent further spread of infections,” he wrote in a statement. “Close contact with others even if you are in the outdoors is still considered close contact and can lead to more infections as we still have new cases of COVID-19 being detected each day in Missouri.

“The virus can be transmitted even among those young and healthy who aren’t experiencing symptoms. When they then carry the virus and transmit it to a more vulnerable person, this is when we tend to see the long-lasting and tragic impact of these decisions that are being made.”