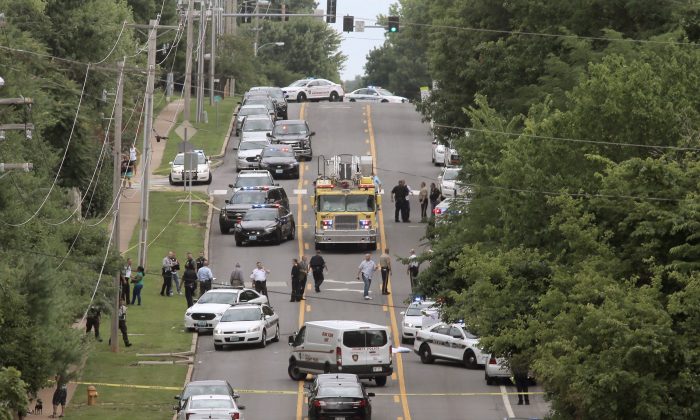 Police investigate a scene in Ballwin, Mo., Friday, July 8, 2016, after a Ballwin police officer was shot during a confrontation with a man on a street. Authorities say the wounded police officer is hospitalized didn't offer any immediate word about the officers medical status. A suspect is in custody, and a handgun has been recovered. (Cristina Fletes/St. Louis Post-Dispatch via AP)
US

KANSAS CITY, Mo.  — A suburban St. Louis police officer was “ambushed” during a traffic stop Friday and critically injured when he was shot at least once from behind as he walked to his patrol car to check the suspect’s driving status, authorities said.

Antonio Taylor, a 31-year-old black man who was paroled in 2015 after serving time on a federal weapons charge, was charged with assault of a police officer, armed criminal action and a felon in possession of a firearm, St. Louis County Prosecutor Bob McCulloch said Friday.

McCulloch said there’s no evidence of any dispute between Taylor and the officer before the gunfire. Ballwin Police Chief Kevin Scott said he “can’t even begin to speculate” about a motive, including whether the shooting involving the white officer, a nine-year police veteran, had racial overtones.

Authorities have not named the officer, and the criminal complaint identifies the officer only as “M.F.”

The shooting followed the previous night’s attack in Dallas that killed five officers and wounded seven during a protest over the deaths of black men killed by police this week in Louisiana and Minnesota.

The officer was walking to his car after the initial conversation with the motorist he stopped for speeding when that driver “advanced quickly” on him from behind, firing at least three shots, Scott said. The officer “had no chance at all” to pull his handgun and “was completely helpless,” Scott said, noting the encounter was recorded by the police car’s dashcam.

After the shooting, Belmar said, the suspect sped away before an officer from another police department spotted the car about 4 miles away. The suspect abandoned his vehicle and fled on foot before being arrested about five minutes later, Belmar said.

The suspect was on probation for a weapons violation in St. Louis, Belmar said, had been on probation for a stolen vehicle in Oklahoma and was picked up on a gun charge in California, drawing a prison term for being a felon in possession of a firearm. He was paroled in March 2015.

Citing his concern about the shooting and the Dallas tragedy, Missouri Gov. Jay Nixon opted against leaving Friday for an eight-day overseas trade mission as planned and instead would return to Missouri from a Philadelphia event, spokeswoman Channing Grate said.

The shootings of officers in Ballwin, Dallas, Tennessee and Georgia in a 24-hour period prompted police agencies regionally and elsewhere in the U.S. to take precautionary safety measures. Earlier Friday, St. Louis Police Chief Sam Dotson said his city’s law officers will work in pairs until further notice because of the Dallas killings, and that all officers must wear bullet-resistant vests when on duty outside of police stations.

Belmar said his department has gone to 12-hour days now through the weekend, given the national debate about policing and minorities.

“It’s an unfortunate state of events we’re dealing with right now,” he said. “I do understand the silent majority out there supports us.”

Taylor is being held on $500,000 cash bond and is expected to be arraigned on the felony charges Monday morning.