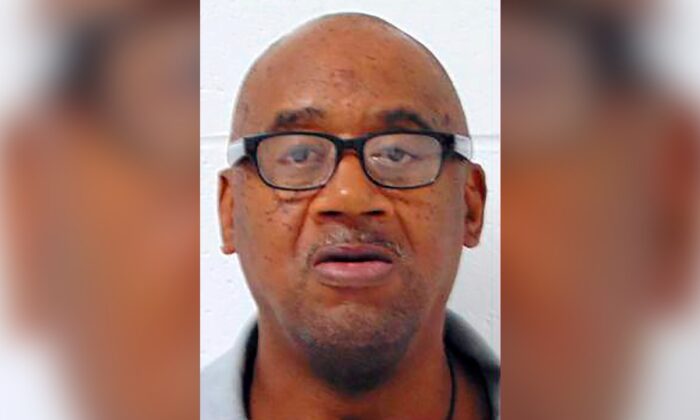 Ernest Johnson is seen in this file photo. (The Missouri Department of Corrections via AP)
Crime and Incidents

BONNE TERRE, Mo.—A Missouri man was put to death Tuesday for killing three workers while robbing a convenience store nearly three decades ago, an execution performed over objections from racial justice activists, lawmakers, and even the pope.

Ernest Johnson died from an injection of pentobarbital at the state prison in Bonne Terre. He silently mouthed words to relatives as the process began. His breathing became labored, he puffed out his cheeks, then swallowed hard. Within seconds, all movement stopped.

In his written last statement, Johnson said he was sorry “and have remorse for what I do.” He said he loved his family and friends and thanked those who prayed for him.

Johnson was pronounced dead at 6:11 p.m., nine minutes after the dose was administered. A corrections department spokeswoman said four relatives representing all three victims were present. Johnson’s witnesses included relatives and his lawyer. No relatives spoke after the execution.

It was the first execution in Missouri since May 2020 and just the seventh in the United States this year.

The state moved ahead with executing Johnson despite claims by his attorney that doing so would violate the Eighth Amendment to the U.S. Constitution, which prohibits executing intellectually disabled people.

Johnson had a history of scoring extremely low on IQ tests, dating back to childhood. His attorney, Jeremy Weis, said Johnson also was born with fetal alcohol syndrome and lost about one-fifth of his brain tissue when a benign tumor was removed in 2008.

A representative for Pope Francis was among those who urged Republican Gov. Mike Parson to grant clemency, telling Parson in a letter that the pope “wishes to place before you the simple fact of Mr. Johnson’s humanity and the sacredness of all human life.” Parson announced Monday that he would not intervene.

It wasn’t the first time a pope has sought to intervene in a Missouri execution. In 1999, during his visit to St. Louis, Pope John Paul II persuaded Democratic Gov. Mel Carnahan to grant clemency to Darrell Mease, weeks before Mease was to be put to death for a triple killing. Carnahan, who died in 2000, was a Baptist, as is Parson.

In 2018, Pope Francis changed church teaching to say capital punishment can never be sanctioned because it constitutes an “attack” on human dignity. Catholic leaders have been outspoken opponents of the death penalty in many states.

Racial justice activists and two Missouri members of congress—Democratic U.S. Reps. Cori Bush of St. Louis and Emmanuel Cleaver of Kansas City—also called on Parson to show mercy to Johnson, who is black.

But Parson announced Monday he would not grant clemency, and the courts declined to intervene.

Johnson was a frequent customer of a Casey’s General Store. Court records show that on Feb. 12, 1994, he borrowed a .25-caliber pistol from his girlfriend’s 18-year-old son, with plans to rob the store for money to buy drugs.

In a 2004 videotaped interview with a psychologist shown in court, Johnson said he was under the influence of cocaine as he waited for the last customer to leave at closing time. Three workers were in the store: manager Mary Bratcher, 46, and employees Mabel Scruggs, 57, and Fred Jones, 58.

On the video, Johnson said he became angry when Bratcher, who claimed not to have a safe key, tried to flush it down the toilet. He shot the victims with the borrowed gun, then attacked them with a blunt instrument. Police found two victims in the store’s bathroom, and the third in a cooler.

“This was a hideous crime,” said Kevin Crane, the Boone County prosecutor at the time. “It was traumatic, and it was intense.”

Police officers searching a nearby field found a bloody screwdriver, gloves, jeans, and a brown jacket, and questioned Johnson within hours of the killings. At Johnson’s girlfriend’s house, officers found a bag with $443, coin wrappers, partially burned checks, and tennis shoes matching bloody shoe prints from inside the store.

Johnson had previously asked that his execution be carried out by firing squad. His lawyers argued that Missouri’s lethal injection drug, pentobarbital, could trigger seizures due to the loss of the brain tissue when the tumor was removed.

Missouri law does not authorize execution by firing squad.

Of the six previous U.S. executions this year, three were in Texas and three involved federal prisoners.

The peak year for modern executions was 1999, when there were 98 across the United States. That number has gradually declined and just 17 people were executed last year—10 involving federal prisoners, three in Texas and one each in Georgia, Tennessee, Alabama, and Missouri, according to a database compiled by the Death Penalty Information Center.