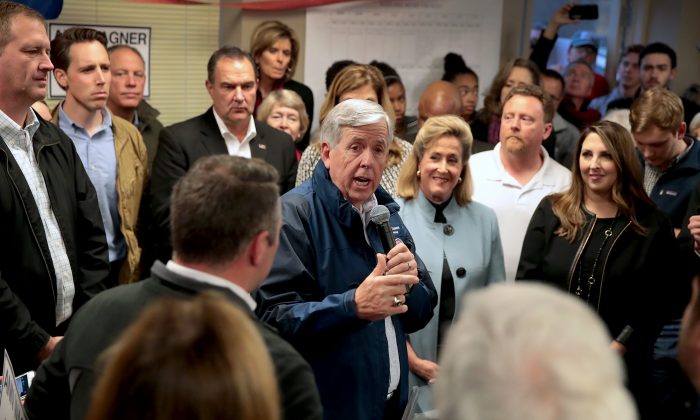 The Missouri House of Representatives approved a bill that would ban most abortions in the state on May 17, one day after it was approved by the state Senate.

The legislation states, “It is the intent of the general assembly of the state of Missouri to defend the right to life of all humans, born and unborn, and declares that Missouri … [is] a ‘sanctuary of life’ that protects pregnant women and their unborn children.”

If a heartbeat is detected for the unborn child, the bill would make it illegal to get an abortion unless the mother’s life is in danger. If a heartbeat is not detected, abortions are legal if completed within 96 hours of the detection test.

The bill also outlined that if federal law is changed then “abortion shall not be permitted in the state under any circumstances.”

“If a total ban is not possible, abortions shall be limited to women who are less than eight weeks gestational age, with a required fetal heartbeat or brain function test.” If a court rules against the law, then it would revert to banning abortions for women after 14 weeks of gestation. If that is also challenged successfully, then the law would not permit abortions past 18 weeks gestational age.

The bill also prohibits “selective abortions due to sex, race, or a diagnosis or potential diagnosis of Down Syndrome.”

Physicians who fail to perform the heartbeat test prior to carrying out an abortion face having their medical license revoked or suspended and a $1,000 fine. Any physician who performs an abortion after a fetal heartbeat is detected will have his or her license revoked and any future license application denied.

If a physician carries out an abortion on an unborn child at 20 weeks or later, unless the mother’s life is in danger, then the doctor would be guilty of a felony and face suspension or revocation of their license.

Women who get abortions would not be charged with a crime.

Earlier this morning the Missouri Senate passed an 8-week abortion ban with no exceptions for rape or incest. It’s now onto the House for final approval before Friday.

Gov. Mike Parson is ready to sign per a press conference Wednesday.

Missouri Gov. Mike Parson, a Republican, was expected to sign the measure, according to the St. Louis Post-Dispatch. A press conference for the governor was scheduled for May 22.

The bill passage came the same week the Alabama governor signed a bill prohibiting abortions in all cases except for medical emergency, a bill that supporters said they hoped would trigger a legal challenge to the 1973 Supreme Court ruling, Roe v. Wade.

Missouri’s law, in contrast, was embedded with a series of triggers that set in with each legal challenge that is ruled on, if the ruling is against the law.

State Rep. Nick Schroer, a Republican who wrote the bill, said it was “made to withstand judicial challenges and not cause them.”

Mo. St. Rep Nick Schroeder starts the debate on his House “heartbeat bill””. It will be passed and sent to the Gov later this summer Bans abortions after 8 weeks. #Heartbeatbeat #NickSchroer #Missouriabortion #KMBC pic.twitter.com/miJmdFpLy6

“While others are zeroing in on ways to overturn Roe v. Wade and navigate the courts as quickly as possible, that is not our goal,” Schroer said, according to the Associated Press. “However, if and when that fight comes we will be fully ready. This legislation has one goal, and that goal is to save lives.”

As in other states that passed similar bills, Democrats opposed the measure.

“This gives more rights to the rapists than it does the mother,” said Rep. Doug Beck, a Democrat, told the Post-Dispatch. “Perpetrators of incest would have more rights.”

Republicans said it was a necessary law that will protect unborn children.

“Every single right we have is only possible for each one of us if we have the right to life,” said Republican Rep. Sara Walsh.