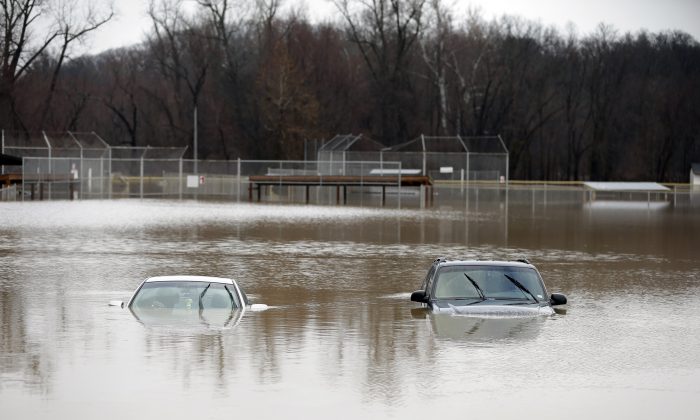 Two cars are submerged in floodwater in a park Monday, Dec. 28, 2015, in Kimmswick, Mo. Missouri Gov. Jay Nixon has declared a state of emergency due to wide spread flooding around the state that has closed many roads. (AP Photo/Jeff Roberson)
US

The latest developments on flooding in the Midwest (all times local):

Several businesses are flooded in the eastern Missouri town of Union after a small river raged out of control.

The Bourbeuse (BURR-bus) River reached an all-time high Tuesday, nearly 20 feet above flood stage. Stephanie Norton of the Franklin County Emergency Management Agency says no one has been killed or injured. However, water is near the roofs of a McDonald’s, QuikTrip and several other businesses that sit near the normally docile river.

The Bourbeuse is among several smaller rivers in eastern Missouri that are seeing record or close-to-record flooding. The Meramec River in the St. Louis area is nearly 30 feet above flood stage in some spots, forcing scattered evacuations and the closure of several roads.

The U.S. Coast Guard has closed a portion of the Mississippi River near St. Louis due to flooding.

The Mississippi River is a vital transportation hub for barges that carry agricultural products and other goods.

Thirteen flood-related deaths have now been confirmed in Missouri.

Gov. Jay Nixon announced the new total during a visit Tuesday to Perry County, where a record crest along the Mississippi River is predicted.

Nixon did not give details about the latest confirmed fatalities, but said nearly all of those who died in Missouri were in vehicles that drove onto flooded roadways.

He urged motorists to stay away from roads with even low levels of water because fast-moving current can push cars and trucks off the roadway.

Previously, 10 deaths from flooding had been reported.

Water has come over the levee protecting the St. Louis-area town of West Alton, Missouri.

The mayor on Tuesday ordered anyone who has not yet evacuated to get out.

About 520 people live in West Alton, a Mississippi River town about 20 miles north of St. Louis. Mayor William Richter urged evacuations over the weekend after it became clear the river would rise so high that the levee couldn’t hold back the water.

West Alton is near the convergence of the Missouri and Mississippi rivers.

Rising water from the Mississippi River has Illinois corrections officials preparing for possible flooding at a prison in the southern part of the state with nearly 3,700 inmates.

Illinois Department of Corrections spokeswoman Nicole Wilson says that employees and emergency work crews at the Menard Correctional Center near Chester are filling sandbags and “working around the clock” as the nearby floodwaters continue to rise.

The maximum security prison is on lockdown, and visits have been suspended.

Officials also anticipate having to bring in hundreds of portable toilets in case the prison’s water service is shut down.

A search has resumed in northern Oklahoma for a country singer from Arkansas who went missing along with a friend while duck hunting in severe weather.

On Monday, troopers recovered the body of Strickland’s hunting companion, Chase Morland, from a Kaw Lake.

Strickland is the lead singer of the Arkansas-based country-rock band Backroad Anthem.

The weekend storms are blamed for at least three deaths in Oklahoma and more than 100 injuries, according to the Oklahoma State Department of Health.

He is one of several people missing after heavy rains caused extensive flooding. Recovery efforts also are underway in Polk and Jasper counties.

The soldier was last seen with four other international soldiers who drowned Saturday night when their vehicle was swept off a Pulaski County road. Sheriff Ron Long said Tuesday that the search is focused on that area.

Fort Leonard Wood says the soldiers were part of a program that brings troops from other countries to the installation to study. Their names and where they are from hasn’t been released.

Two other people also drowned in Pulaski County after a second vehicle was swept away, also on Saturday.

More than 100 volunteers have turned out in blustery cold weather to fill sandbags in St. Louis, where a flooded waterway threatened hundreds of homes.

City workers directed the volunteers Tuesday morning along the River Des Peres, a man-made storm sewer channel that flows into the Mississippi River a few miles south of the Anheuser-Busch brewery.

Alderman Larry Arnowitz was among the volunteers. He says that the predicted crest of nearly 15 feet above flood stage could damage up to 500 homes, though he believes that with no new rain predicted and volunteers’ help, most should remain dry.

The sandbags will be piled together in a low-lying area near Interstate 55.

A wastewater treatment plant has stopped operating near St. Louis, causing sewage to go directly into nearby rivers and streams.

The Metropolitan Sewer District of St. Louis said Tuesday that recent heavy rainfall and the flooding on the Meramec River are the apparent cause of problems at the Fenton wastewater treatment plant. The plant stopped operating Monday night.

The public is urged to avoid contact with floodwater or sewage in low-lying floodedareas near the plant. It isn’t clear when the plant would start operating again.