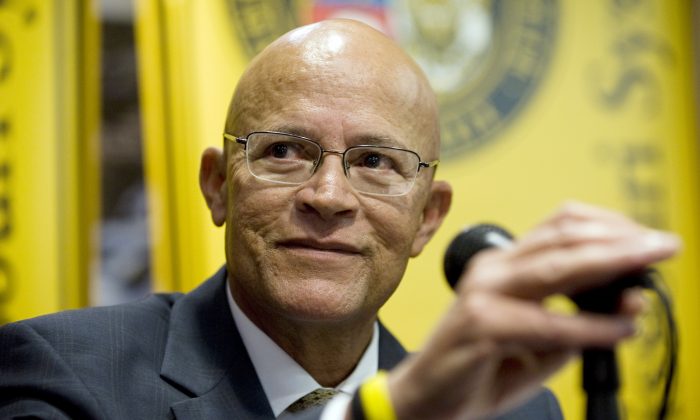 Michael Middleton speaks at a news conference after the University of Missouri Board of Curators named him interim president of the university system, Thursday, Nov. 12, 2015, at University Hall in Columbia, Mo. (Daniel Brenner/Columbia Daily Tribune via AP)
US

The former law professor, whose appointment was announced Thursday, spent 18 years as deputy chancellor on the same Columbia campus from which he graduated in 1971 and later received a law degree. The 68-year-old stepped down in August but continued to work part-time with now-ousted Chancellor R. Bowen Loftin on a plan to increase inclusion and diversity at the school.

As an undergraduate, Middleton was a founder of the Legion of Black Collegians, an activist student group that participated in the protests that led to this week’s back-to-back resignations of former system President Tim Wolfe and Loftin. Protest leaders from the group Concerned Student 1950 — named for the year Missouri admitted its first back student — included some of the unmet demands Middleton helped create as a civil rights and anti-war protester.

Middleton said he keeps a list of those original demands on his desk.

His bona fides contributed to a warm welcome and vigorous applause from university administrators and leaders of two black student groups who attended Middleton’s news conference.

“I am very excited,” said Tamara Hodges, a member of the Black Law Students Association at Missouri. “He’s been a part of this community for a long time. He’s going to be a great leader for this system.”

Concerned Student 1950 didn’t immediately respond to a request for comment about Middleton’s new position. A student who was one of the original organizers of the group was not immediately available for comment.

Middleton’s pride in the university — which he called “an incredible institution” — was apparent. So was his frustration and anger over recent events, including the student government president’s report of having racial slurs hurled at him, a black man, and the discovery of swastika drawn in feces in a dormitory bathroom.

“I was glad that I retired,” Middleton said. “It was embarrassing. It was hurtful. It was scary. It crossed my mind that my 30-year career here was a failure.”

He vowed to address the frustrations behind student-led protests but said that didn’t automatically mean the group would get its way.

He also spoke candidly about the challenges the four-campus system faces and the broader societal divide that he’s spent most of his adult life trying to bridge, including a stint in Washington as a trial attorney in the Department of Justice’s Civil Rights Division.

Middleton also worked as an interim vice provost for minority affairs and faculty development, a role in which he was credited with turning women’s studies and black studies programs into their own departments.

Asked if he felt like his appointment was based on race, Middleton gave a nuanced response. The university system’s first black leader was the late Elson Floyd, who was in charge from 2003 to 2007.

“That’s a complex question, and it’s reflective of the institutional racism that we are trying to get beyond,” he said. “I suspect that my color will be met with much criticism from parts of our community.

“I also suspect that my color was a factor in the judgment that I was the person at this time for this position.”

Middleton added that “at the moment” he wasn’t interested in the permanent job.