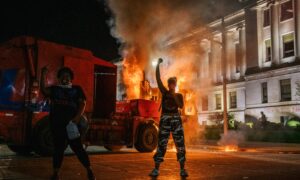 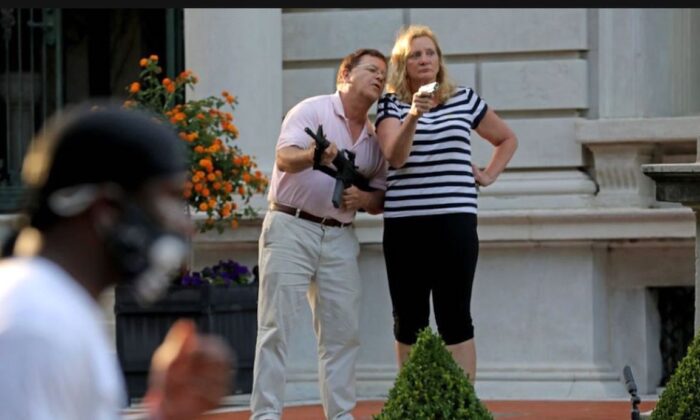 Mark and Patricia McCloskey stand in front of their house holding firearms as activists walk through the gated neighborhood in the Central West End of St. Louis, Mo., on June 28, 2020. (Laurie Skrivan/St. Louis Post-Dispatch via AP)
Judiciary

The judge’s decision upheld a previous ruling in December by Judge Thomas Clark to remove Gardner from prosecuting the case. Clark disqualified Gardner and her office after discovering she had used the case in her campaign fundraising.

A spokesperson said Gardner will appeal to the Missouri Supreme Court in an effort to reverse the ruling, according to St. Louis Post-Dispatch.

Clark said in his Dec. 10 order that the “court does not seek to ‘interfere with the democratic process’ but strongly believes the present ‘circumstances’ justify disqualification,” but that “campaigning without tainting the right to a fair trial is equally compelling and constitutionally sacred. ”

The Daily Caller reported that Friday’s ruling does not apply to Patricia McCloskey, so the couple’s attorneys are trying to find a way to make the decision cover both of them.

Gardner, a Democrat, featured the case prominently in fundraising emails while campaigning for reelection over the summer. The emails “raise an appearance of impropriety and warrant disqualification,” according to the judge.

In one campaign email Gardner accused President Donald Trump and Republican Gov. Mike Parson of “fighting for the two who pointed guns at citizens during the Black Lives Matter protests,” according to local TV channel KSDK.

Mark and Patricia McCloskey, both lawyers, were charged in June with unlawful use of a weapon, a felony, after brandishing their guns when Black Lives Matter protesters barged into their private neighborhood on their way to the house of Mayor Lyda Krewson’s home.

The couple pleaded not guilty in October.

Gardner charged that waving weapons around violated the law, while the McCloskeys asserted they were in fear for their lives, calling the group of activists a mob and citing violent incidents that had happened at other protests.

The case drew nationwide attention. Both Parson and Trump indicated they would pardon the couple if they were convicted.