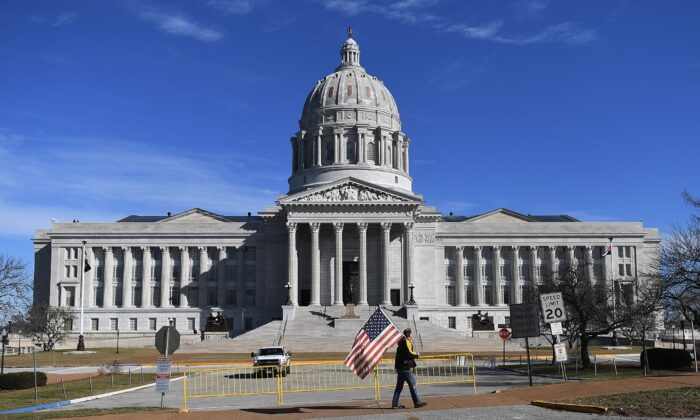 A man waves a U.S. flag as he walks outside the Missouri State Capitol building in Jefferson City, Mo., on Jan. 20, 2021. (Michael B. Thomas/Getty Images)
Critical Race Theory

In a complaint (pdf) filed on Nov. 16, Schmitt alleged that critical race theory has been part of teacher training materials in SPS for at least two years and that the district has violated Missouri’s Sunshine Law to avoid being held accountable by concerned parents.

“Springfield Public Schools provides outrageous, unlawful, and unaffordable fee estimates for Sunshine Law requests so that it does not have to produce records to members of the public,” the complaint reads.

Schmitt said that in response to his request seeking “records relating to critical race theory,” the district demanded a payment of $35,700 to search for, research, and retrieve those records, including $727.50 to search the Staff Google Drive.

Under Missouri’s Sunshine Law, a government entity such as SPS isn’t allowed to demand a deposit for items other than copies, and must produce the copies requested using methods that “result in the lowest amount of charges.” Schmitt is accusing the school district of violating both statutes in their cost estimates.

He also noted that the SPS has publicly acknowledged that they’re instructing teachers and staff on critical race theory. In a December 2020 report (pdf), the district said it had required many administrators and staff members to participate in a one-day “Facing Racism” training, with one of its objectives being “to introduce the components of critical race theory from educational research with applications to the district.”

According to the complaint, another training required teachers and staff at SPS to consult an “oppression matrix” and identify which “privileged” or “oppressed” social group they supposedly belong to—a concept popularized by proponents of critical race theory. Yet another graphic that was presented to SPS’s Executive Leadership Team at an October 2020 training stated that the phrase “Make America Great Again,” “police murdering POC (People of Color),” and “celebration of Columbus Day” are examples of “covert white supremacy.”

“Parents have every right to know exactly what is being taught to their children, especially when public school systems are implementing components of critical race theory and so-called ‘antiracism’ teachings in teacher training and applying social justice scorecards to math and other core curriculum,” Schmitt said in a statement announcing the legal action, which seeks a court order that would ensure that SPS releases all responsive records and pay a $1,000 fine for Sunshine Law violations.

In a statement released to the press, SPS condemned the lawsuit as a “loud, divisive, and misguided distraction” from the district’s work to promote equity.

“SPS is disappointed by the Attorney General’s decision to use the power of his office to attack public education,” the district stated, arguing that the Sunshine Law request was “extraordinarily broad in scope” and could have diverted “hundreds, if not thousands, of hours of district staff time to search and review thousands of pages of documents.”

“SPS has been very clear: Critical Race Theory [CRT] is not being taught in our classrooms. Our work is focused on equity, not CRT.”

Critical race theory is an outgrowth from Marxism that views society through the lens of a power struggle between white and non-white people, who are labeled “oppressors” and “oppressed,” respectively. Critical race theorists see deeply embedded racism in all aspects of U.S. society, including in neutral systems such as constitutional law and standardized tests, and deem it to be the root cause of racial inequity, or different outcomes for different races.