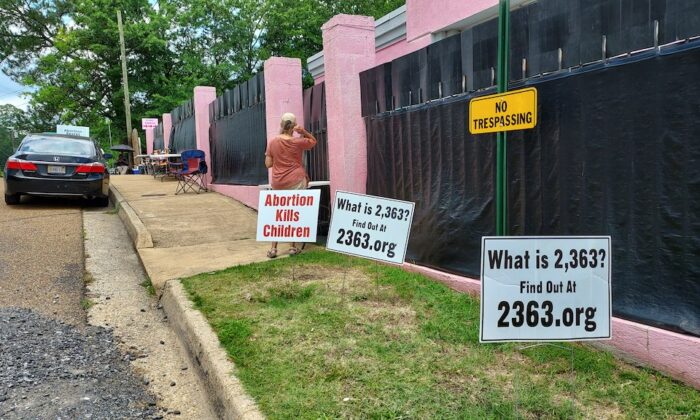 “Mississippi’s laws to promote life are solid and thanks to the Court’s clear and strong opinion in Dobbs v. Jackson Women’s Health Organization, they can now go into effect,” Fitch said in a press release. “As we have said throughout this case, Roe v. Wade presented a false choice between a woman’s future and her child’s life. As we proceed in this post-Roe world, the people of Mississippi and of all the states will be able to fully engage in the work of both empowering women and promoting life. I am grateful that the Court has given us this opportunity.”

Once the ban takes effect on July 7, anyone who performs or attempts to perform an abortion will be charged with a felony punishable with a prison sentence of up to 10 years. Exceptions apply to cases of rape, incest, or the pregnancy endangering the mother’s life.

The Supreme Court ruling upheld a Mississippi law that bans abortion after 15 weeks of pregnancy, in addition to overturning Roe.

The ruling also reversed Planned Parenthood v. Casey, which argued that states couldn’t impose restrictions on abortion before a fetus became viable outside the womb, though it didn’t specify when viability outside the womb occurred.

The JWHO in Jackson, Mississippi, the state’s only operating abortion clinic, sued the state over the Gestational Age Act, which only allows for abortions after 15 weeks of gestation for medical emergencies or severe fetal abnormality.

The Gestational Age Act was signed into law in March 2018 before JWHO filed suit against the state, challenging the constitutionality of the legislation, arguing that the law went against the court’s 1973 Roe V. Wade ruling that women had a constitutional right to abortion based on the premise of the right to privacy as a constitutionally protected right.

Those who are pro-life, and many legal scholars have argued that the Supreme Court’s interpretation of the Fourteenth Amendment providing a fundamental right to privacy, protecting a women’s right to abortion, was too great a leap of interpretation.

The state then appealed the Fifth Circuit’s decision to the U.S. Supreme Court in June 2020, which ruled in favor of the state and overturned Roe v. Wade on June 24.

The narratives leading up to the Roe v. Wade 1973 decision, in addition to its overturning, are fraught with inconsistencies, according to constitutional scholars and media analysts.

In a documentary on Roe v. Wade by The Federalists Society, a conservative and libertarian legal organization, Professor of Law at Antonin Scalia Law School Helen Alvare, said, “It had the perfect state of facts even though, we now know, they were a lie. They claim that Norma McCorvey was raped. That was not the case. But it seemed to be the most sympathetic possible case.”

McCorvey, also known as Jane Roe, claimed she had been raped by black men, which is why she said she wanted to have the abortion.

She later said this was a lie in a televised report, claiming that she had become a Christian and regarded her role in the case for the pro-abortion movement as a mistake.

Margaret Sanger, founder of the American Birth Control League that later became Planned Parenthood, also had a controversial past, suggesting a belief in population control methods such as eugenics and race-based selection, according to historical documents.

In a 1923 New York Times article documented by 700 Club Interactive, Sanger is reported to have referred to human beings as weeds in a statement on eugenics, saying, “It means the release and cultivation of the better racial elements in our society, and the gradual suppression, elimination, and eventual extirpation (destruction) of defective stocks—those human weeds which threaten the blooming of the finest flowers of American civilization.”

In 1939, according to the 700 Club Interactive’s documentary on Sanger, she launched “The Negro Project,” an initiative formed on the pretense of “better health and family planning for poor blacks in the south,” though critics of the program argued it was an “attempt to limit the black race.”

Sanger, according to the documentary, had once even spoken before the Klu Klux Klan and has since been praised by Hillary Clinton.

In several interviews, Johnson explained why she left Planned Parenthood.

“I believed we were doing the right thing,” she said in an interview with Steven Crowder. “In 2009, we were building—it’s now in operation—the largest abortion facility in the western hemisphere … we were building an abortion facility that would abort babies through 24 weeks pregnancy for any reason. That was problematic for me because I knew we were in the point of viability for babies.”

Months later, she said she was instructed by her supervisor to double her abortion quota—”the number of abortions that we had to sell to women coming in.”

“And then, a few months later, I was asked to come in and assist during an ultrasound-guided abortion procedure,” Johnson said. “Ultrasounds are not typically used during the actual abortion procedure. They’re used before so that you can date the pregnancy so that you know how much to charge the woman for an abortion, but then the ultrasounds are rolled away and the abortion itself is actually done in a blind manner.”

Johnson referenced several state laws that allow for abortions to be done up until the date of birth “for any reason,” such as in New York and Colorado, which stepped out of the bounds of the former pro-abortion slogan, “safe, legal, and rare,” later criticized by pro-abortionists as outdated, before changing it to “safe and legal” under the invocation of their right to get an abortion at any time.

States like Texas have passed laws restricting abortions after a fetal heartbeat can be detected.

Where life begins has been an arguing point for both pro- and anti-abortionists.

Despite medical advancements that have brought insights into the nature of life, neither side seem to have come to an agreement on when a fetus becomes a sentient being, though when people die, their death is usually determined by the cessation of their beating heart.

Some would argue that a heartbeat is a reasonable sign of life, while others argue that life begins at conception.

Pro-abortionists argue that life doesn’t begin at conception or with a heartbeat, only until he or she has taken his or her first breath of air outside of the womb.

‘We’re Proud to Do Abortions’

Diane Derziz, the owner of JWHO, gave a press conference on June 24 in response to the court ruling outside of the Pink House, where anti-abortionists have protested for decades.

Law enforcement and escorts guide those wanting to get an abortion in and out of the parking lot of the building, where Derziz said they will continue until July 7.

She recapped the pro-abortion argument stating that only the disenfranchised will now be prohibited from having abortions, causing them to resort to risky illegal abortion methods, while the wealthy go on to have “safe access.”

“This is going to hit the most vulnerable women,” Derzis said. “If you’re a woman of privilege, you can get a flight to New York and be home by dinner.”

Derziz said she’s been in the business of abortions for 46 years and that she’s not giving up.