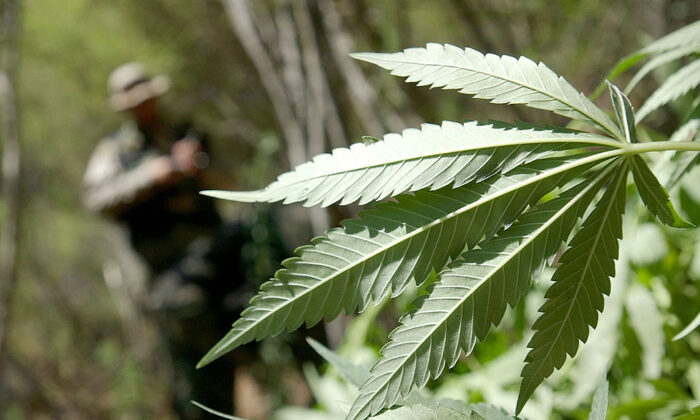 A file photo of a Campaign Against Marijuana Planting (C.A.M.P.) Special Agent approaches a pot plant during a marijuana garden raid in a remote area of Annapolis, Calif., on Sept. 4, 2002. (Justin Sullivan/Getty Images)
Constitutional Rights

A divided Supreme Court of Mississippi upheld a prisoner’s sentence of life imprisonment for possession of marijuana under the state’s violent habitual offender law.

The affirmation of the sentence comes as laws regarding marijuana are being loosened nationwide.

A Buffalo Law Review article by Paul J. Larkin Jr. titled “Cannabis Capitalism” from a year ago, points out that at that time, 36 states had medical marijuana programs and 14 states—plus the District of Columbia—now allow it to be used recreationally.

Mississippi itself created a medical marijuana program when a state statute was signed into law on Feb. 2, 2022.

The defendant, Allen Russell, argued that the life sentence without the possibility of parole violated his right under the Eighth Amendment to the U.S. Constitution to be free from cruel and unusual punishment, along with his constitutional right not to be subjected to ex post facto laws.

The Court of Appeals stalemated in October 2019, voting 5–5 on his appeal, which had the effect of upholding the sentence.

On June 16, the Supreme Court of Mississippi voted 6–3 to uphold the sentence under the habitual offender provisions of the Mississippi Code.

“Because the trial judge followed the law to the letter, we affirm,” the majority opinion (pdf) written by Justice Robert P. Chamberlin stated. “The trial judge did not have sentencing discretion in this case.”

According to the opinion’s summary of the facts, Hattiesburg Police Department officers executed a search warrant at Russell’s home and found five bags of marijuana weighing 79.5 grams, or just over 2.5 ounces.

A forensic analysis determined the combined weight of two of the bags was 43.71 grams, so the remaining bags weren’t examined because the threshold weight for a possession charge had already been met.

Russell was indicted on one count of possessing more than 30 grams but less than 250 grams of marijuana and for being a violent habitual offender under Mississippi Code Section 99-19-83.

A jury convicted Russell on the possession charge.

State prosecutors presented evidence of his prior felony convictions—two for burglary of a dwelling and one for possession of a firearm while being a convicted felon.

The court found Russell was a violent habitual offender and handed down the life sentence without eligibility for probation or parole.

Chief Justice Michael Randolph wrote in a separate concurring opinion that it was “pertinent to note that the arrest came while law enforcement was attempting to serve another drug-related warrant on Russell as well as execute a search warrant on his premises.”

The search warrant came about when Russell was investigated as a suspect in a murder in a hotel room in which a medical document naming Russell was found, Randolph wrote.

Russell didn’t cooperate with police and “chemical gas had to be deployed to obtain Russell’s surrender,” the chief justice added.

Throughout his criminal career, Russell, who “is no stranger to the criminal justice system,” had been treated leniently by the courts.

“Russell has received a harsh punishment not because he possessed a small amount of marijuana, but because he has repeatedly refused to abide by the laws enacted to protect all the citizens of our state,” Randolph wrote.

Justice Josiah Coleman wrote a dissenting opinion—joined by two justices—in which he suggested that Russell had been treated shabbily by the courts in this case.

A lack of legal certainty exists regarding Russell’s criminal history, Coleman wrote, pointing out that “burglary was not considered a per se crime of violence until” state law made it so on July 1, 2014.

Russell “pled guilty to two counts of burglary in 2004,” but before the law was changed in 2014, “burglary was only considered a crime of violence if actual violence took place during the burglary.”

“We do not know whether Russell’s burglaries involved actual violence, but the fact that he was allowed the opportunity by the sentencing court to participate in the Regimented Inmate Discipline Program tends to indicate they did not.”

Coleman wrote he would have remanded the case to the trial court to re-examine the Eighth Amendment issue and for re-sentencing.