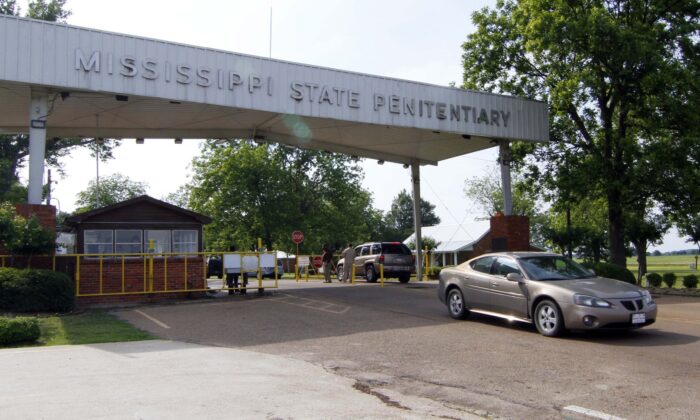 Traffic moves past the front of the Mississippi State Penitentiary in Parchman, Miss., on May 19, 2010. (Rogelio V. Solis/AP Photo)
US News

Mississippi Prisons Remain on Lockdown, Chief Says 4 of 5 Killings Carried Out by Gangs

Mississippi’s outgoing prisons chief said Friday that at least some of the five killings of inmates since Sunday stem from gang violence, as guards struggle to maintain control of restive inmates.

“These are trying times for the Mississippi Department of Corrections,” Commissioner Pelicia Hall said in a statement hours after an inmate was found stabbed to death in his cell at the Mississippi State Penitentiary at Parchman.

Denorris Howell, 36, was found before 3 a.m. in his cell, covered in blood with a neck wound, becoming the fifth to die since violence erupted Sunday with a stabbing at South Mississippi Correctional Institute in Leakesville.

Hall said investigators believe only four of the five deaths are gang-related. The department didn’t immediately say which death was not. She said the department won’t confirm the names of the gangs “for security purposes,” but relatives of inmates who spoke to The Associated Press and other news outlets said there’s an ongoing confrontation between the Vice Lords and Black Gangster Disciples.

It wouldn’t be the first time the two gangs have warred behind bars in Mississippi, with previous confrontations at Parchman and other prisons over the past 15 years. A 2015 survey found nearly 3,000 Black Gangster Disciple members and nearly 2,000 Vice Lords in prisons statewide.

Besides Howell, Terrandance Dobbins, 40, was killed Sunday at South Mississippi. Walter Gates, 25, was stabbed and several other inmates were injured Tuesday at Parchman during a fight that spread to multiple units of the sprawling prison.

Then on Thursday, Gregory Emary, 26, was killed at the Chickasaw County Regional Correctional Facility, a county-run jail that holds state inmates. Also Thursday, 32-year-old Roosevelt Holliman was fatally stabbed at Parchman in a fracas that led to multiple injuries.

Corrections officials have refused so far to say how many people overall have been injured, or whether there have been other violent incidents in prisons.

“Now they’re going to war,” she told the Clarion Ledger of Jackson.

Candice Dobbins said she first learned of her brother’s death after a stranger who has a relative in a Mississippi prison phoned her. She said state officials later confirmed the death, but have answered no questions, leaving her to try to glean information from inmates.

Terrandance Dobbins was originally sentenced to life for a killing in Adams County, and later was sentenced to more time after an assault on another prisoner at Parchman.

Dobbins said she had been trying to get her brother transferred because he felt unsafe at South Mississippi.

“Really, the prisoners run the facilities,” Dobbins said. “I know guards have to talk with inmates to keep control of other inmates.”

The violence has left relatives of prisoners terrified, trying to find out whether loved ones are safe. Sonya Young told the AP that her son has been hospitalized at Parchman since Dec. 23, but said she has “no idea why.”

Barbarella Ann Isom’s twin sons are serving 20 years apiece on armed robbery convictions. One is at South Mississippi and one is at Parchman.

“I wish he would be transferred somewhere else,” she said of the son at Parchman. “I know he has to do his time, but I’m afraid for his life.”

Mississippi’s prison system has struggled to fill guard vacancies, with Hall saying it’s difficult to attract people with salaries that start below $25,000 a year. Some guards end up bringing illegal drugs and cellphones into prisons. Criminal charges were filed in 2014 against 26 state correctional officers.

Some prisons, including South Mississippi, have areas where many prisoners are housed in bunks in one large room, instead of individual cells. This can lead to worsened security problems. South Mississippi, in Greene County, was locked down for almost all of 2019, in part because of guard shortages.

Hall announced Tuesday that she will resign in mid-January to take a private-sector job, signaling incoming Governor Tate Reeves won’t retain her upon taking office on Jan. 14.

Reeves tweeted Friday that he’d been briefed and that the first priority was “to restore order and safety,” followed by an investigation and “justice” for those who committed violence.

Outgoing Gov. Phil Bryant was on a family vacation, U.S. Sen. Roger Wicker said Friday. Bryant said on Twitter that he has remained in touch with the corrections commissioner about the prison unrest.

“Gang violence will not be tolerated in state prisons or on our streets,” Bryant tweeted. The violence came even as U.S. District Judge William Barbour ruled Tuesday (pdf) that while conditions may have previously been poor at East Mississippi Correctional Facility near Meridian, there’s no longer any evidence that the privately run prison is violating inmates’ rights.