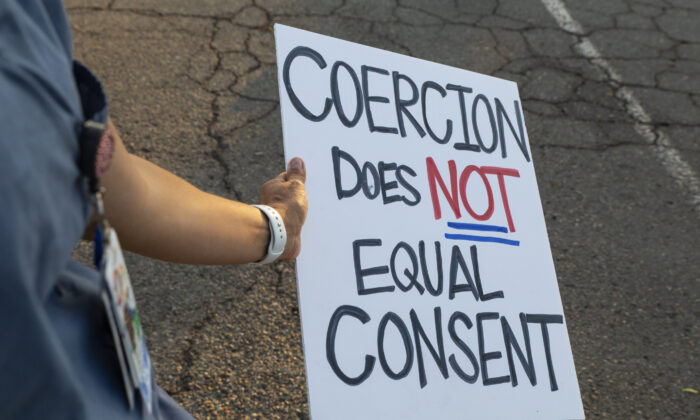 Describing a climate of vaccine shaming and bullying, two Mississippi nurses have reported once amicable work environments degenerate into a division between the vaccinated and the unvaccinated.

One nurse in Jackson, Mississippi—who requested to remain anonymous—told The Epoch Times that when faced with the vaccine mandate at her hospital, she quit and took another job paying $16 an hour more at another health care system that hadn’t implemented the mandate.

However, with President Joe Biden’s announcement on Thursday to mandate the COVID-19 vaccine for health care systems that participate in Medicaid and Medicare programs, the nurse said, even at her new job, her days could be limited.

The mandates will affect more than 80 million workers in the private sector.

“This is not about freedom or personal choice,” Biden said.

For the nurse, it began in December 2020 when the vaccine was offered to staff and she declined.

“Then, we had a financial incentive, but eventually it became a mandate,” she said. “We had to take the shot in order to keep working there.”

Though she considered a religious or medical exemption, she said, eventually she decided that she didn’t want to work in a place that would mandate the vaccine.

Without having a plan, she put in her two-week notice.

“I was just going out on a limb and trusting God,” she said.

Before her two weeks were up, she landed her new job.

For a nurse who had just graduated nursing school in May 2020, keeping a low profile became a navigation tool to get through most days, she said.

“Most people knew I hadn’t taken the shot, and when it was mandated, some asked me if I were going to take it, but ‘no means no,’” she said. “I’m not wavering.”

As the mandate approached, she said she witnessed the workplace become toxic.

“Some doctors—two of them that come to mind—went as far as to say that they did not think that unvaccinated people should be treated,” she said.

If unvaccinated people came to the hospital, she said the doctors claimed that they should have the “door slammed in their face.”

“There was another provider who was actually trying to turn patients away if they were not vaccinated,” she said. “I don’t think she was able to go that far, but she definitely tried to have the front desk ask if patients were vaccinated, and if they said they weren’t, she wouldn’t see them, or would only see them over the phone.”

Overall, she said, “It was hard to watch.”

In Hattiesburg, Mississippi, another nurse told The Epoch Times that the hospital where she works had become equally divisive after a clinic in the system was used as a test site for the Moderna vaccine trials.

Several physicians had participated in the clinical trials, so there was an obligation on the clinic’s part to “declare its success.”

Clinic and hospital employees were some of the first to receive the Moderna vaccine after clinical trials, she said.

And that’s when the work culture changed, she said.

Until then, she said, “The environment had always been such a wonderful place to work.”

“There were a lot of co-workers reporting that physicians would call them stupid or dumb for not getting vaccinated, telling them they will harm or injure others, or be responsible for spread,” she said.  “Suddenly, the unvaccinated became this germ source.”

As time went on, it became even more evident that there was no science behind the claim, she said.

She pointed to a study by the Oxford University Clinical Research Group published in The Lancet that showed vaccinated individuals who got infected with the Delta variant of COVID-19 carried 251 times the viral load in their nostrils compared to those with natural immunity from previous infection with older variants (pdf).

In addition to being shamed, she said the unvaccinated are required to wear N95 masks, which she called a “policy of bullying.”

“What’s basically happening is: we are being told that if we don’t want to get vaccinated, we will make you uncomfortable until you submit,” she said.

With the hospital already facing a staffing shortage, the N95 memo caused even more to quit, she said, because the masks make it difficult to breathe and can adversely affect people, causing a strain on the body that could result in conditions such as heart dysrhythmia.

Though there are media reports of hospitals “filling up” because of COVID-19 patients, she said the story not being told is that this has more to do with a staffing shortage, not a lack of beds.

“Mississippi is already having trouble keeping staff due to lack of competitive pay, but with COVID there have been a large number of nurses that have left hospitals in our state,” she said.

To address staff shortages, Gov. Tate Reeves brought in federally funded staff for hospitals in the state, comprised of nurses who are being paid more than the local nurses.

That, combined with the mandates and discriminatory behavior of employers, she said, caused even more to leave.

If she were to face the mandate, she said she would first file for religious exemption.

If that filing is rejected, the next step would be to go to the Equal Opportunity Employment office and file a complaint, which buys time until a resolution is reached.

If the resolution isn’t acceptable, she said, she would find another job.

“I consider myself an intelligent person,” the nurse said.  “I’ve been trusted to make intelligent, critical decisions for patients every day, and to think that now suddenly I’m unable to do that for myself or to think critically, what they are saying doesn’t add up.”

Within the hospital, she said the unvaccinated gravitated toward each other for support, and many others throughout Mississippi have found refuge in a political action committee called Mississippi Patriots for Vaccine Rights (MPVR), which, according to the nurse, connects health care workers throughout the state with attorneys who provide information on what an employee’s rights are regarding discriminatory practices within the workplace.

MPVR President MaryJo Perry and Vice President Lindey Hughes Magee formed the nonprofit in 2012 as Mississippi Parents for Vaccine Rights as a hub to network parents whose children had suffered injuries as a result of vaccines.

The MPVR gathers reports and connects healthcare workers who choose not to be vaccinated throughout the state.

The consensus among health care workers is that the work environments in health care facilities have become “hostile.”