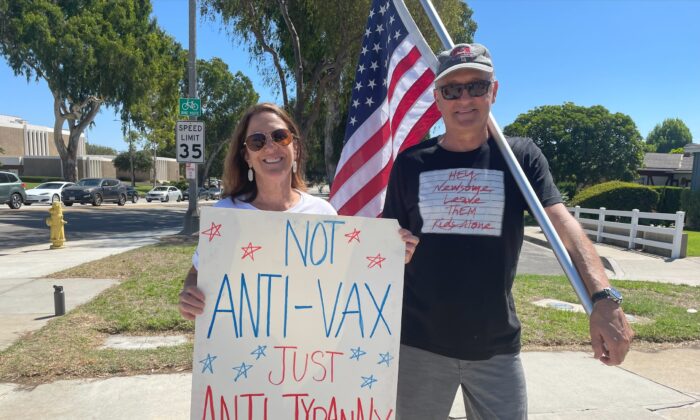 About 100 people stood in the rain on Saturday to protest vaccine mandates in front of a hospital in Columbus, Mississippi.

Nurse Amber Anders organized the rally, one of many that have been held throughout the state.

“My biggest frustration with this is that I know I have natural immunity, so I don’t need the vaccine,” Anders told The Epoch Times.

Her hospital has an Oct. 31 deadline that—if not implemented—will result in the loss of its Medicare and Medicaid certification.

As a nurse, she said she’s seen fully vaccinated people being hospitalized for COVID-19.

“If it’s not working like it’s supposed to, it shouldn’t be mandated, and people should have the right to choose,” Anders said.

Painting the unvaccinated as a threat doesn’t make any scientific sense, Anders said.

“By us not being vaccinated, the only person we could be potentially hurting is ourselves,” Anders said. “The unvaccinated can’t hurt the vaccinated if the vaccine works, which it doesn’t seem to be doing.”

Anders’s lupus, an autoimmune disease, has been inactive for four years; however, her fear is that the vaccine could re-activate it, she said.

“Nobody can guarantee me that it won’t do that, so it’s not a risk I’m willing to take,” Anders said. “If the vaccine actually worked, I would understand a little bit of the push—not the mandate, though. No one should be forced to take a vaccine unless that person knows 100 percent that there are no risks—or that the benefits outweigh the risks—and at this point in time, no one can guarantee that. It hasn’t been out long enough, so we are basically the experiment.”

The American people have gotten sick of the mandates, the disinformation around trying to control the virus, and the push to separate the vaccinated—whom she said can carry the virus as easily as the unvaccinated—from the unvaccinated.

“You never know how the virus itself is going to affect anybody, because it affects everybody differently, so that’s the way I feel about the vaccine,” Anders said.

In addition to the rally, Anders said she’s called several governors, and the responses she’s gotten added up to concurrences that the mandates were wrong.

“Well, that’s fine and well, but until action is taken, words don’t mean anything,” she said. “If we don’t fight this mandate, who knows what’s coming next.”

Anders is a member of the Mississippi Patriots for Vaccine Rights (MPVR), which will be holding an Oct. 9 rally at the state capitol in Jackson, Mississippi.

Since spring, MPVR President MaryJo Perry told The Epoch Times that the organization’s membership has increased from 3,350 to 6,000.

Perry and Vice President Lindey Hughes Magee formed the nonprofit in 2012 as Mississippi Parents for Vaccine Rights as a hub to network parents whose children had suffered injuries as a result of vaccines.

Perry said she’s heard from several Intensive Care Unit (ICU) nurses that they are seeing just as many vaccinated as unvaccinated.

On the horizon of the pandemic, Perry saw the approaching opportunity for the federal government to mandate COVID-19 vaccines, which now not only affects parents and their children, but health care workers and employees in the private sector.

To get a read on where its members stood with the vaccination, MPVR had sent out a survey earlier in the year asking: 1) Are you vaccinated, 2) If you are not, will you consider getting vaccinated?

“The choices were ‘Yes, No, and Hell No,’” Perry said, of which 2 to 3 percent said they were vaccinated, with 60 percent answering, “Hell no.”

Many health care professionals are fighting with legal action, but many are ready to quit, she said.

“We’ve got nurses doing nails now,” Perry said. “It’s pretty bad. They were already discouraged to begin with after FEMA (Federal Emergency Management Agency) nurses were brought in and getting paid more.”

On Sunday, Mississippi Governor Tate Reeves appeared on CNN’s “State of the Union,” calling President Joe Biden’s COVID-19 vaccine mandates “an attack by the president on hardworking Americans and hardworking Mississippians, who he wants to choose between getting a jab in the arm and their ability to feed their families.”

Later in the interview, Reeves asked, “If this president has the ability to mandate vaccines, what powers do we not grant this president?”