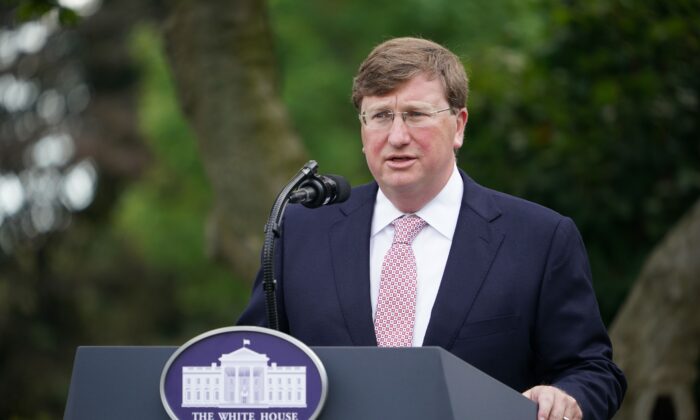 Mississippi Gov. Tate Reeves speaks on COVID-19 testing in the Rose Garden of the White House in Washington on Sept. 28, 2020. (Mandel Ngan/AFP via Getty Images)
US News

Mississippi Gov. Tate Reeves is promising a home for every single baby in his state, where he aims to create a “culture of life” following the Supreme Court’s decision to overturn Roe v. Wade.

“The fact of the matter is this entire court battle was never about winning a court case. It was always about creating a culture of life,” Reeves, a Republican, said on Fox News Sunday on July 3.

“That’s exactly what we’re doing here in Mississippi, and that’s what we as pro-life Mississippians and pro-life Americans have to continue to do,” he continued. “We have to prove that being pro-life is not simply about being anti-abortion. And in our state, we’re enacting policies to do exactly that.”

One of the things that Mississippi will do is to invest in pregnancy resource centers, according to Reeves.

“We’re looking to do everything we can to help create a forever home for every single baby in Mississippi and we believe we will save lives by doing so.”

Mississippi is at the center of Dobbs v. Jackson Women’s Health Organization, the Supreme Court case that led to the overturning of Roe on June 24. The court also upheld a Mississippi law that bans abortion after 15 weeks of pregnancy.

However, the Jackson Women’s Health Organization, Mississippi’s only abortion clinic, has filed a lawsuit in Hinds County Chancery Court to block the ban, citing a 1998 Mississippi Supreme Court ruling that said the right to an abortion was granted by the state’s Constitution.

“We are dealing with that,” Reeves said about the lawsuit. “The chief justice of the Supreme Court has appointed a special judge to hear that case because the four chancellors in Hinds County, which is the court of jurisdiction, recused themselves, and so we are expecting a hearing sometime early this week on that particular case.”

“I do expect for the state’s law to be upheld in the state court and I do expect our trigger law to go into effect,” Reeves said. “Unless there is an injunction which forces us not to enforce it, then, of course, we’re going to enforce the law.”

Reeves warned that physicians in Mississippi could lose their licenses if they are found to provide medication abortions using telemedicine.

“And so, if a physician is attempting to practice medicine in the state of Mississippi, and they’re violating our law, then our State Board of Medical Licensure will pull their license.”

Reeves also said he doesn’t think that any state legislation making an exception for rape will advance to his desk.

“There’s a lot of effort, particularly in Washington and other places, mainly by the Democrats, to try to talk only about the real, small, minor number of exceptions that may exist,” he added.

“If the far-left really believe what they want you to believe, if they really believe that the American people were with them and were for abortion on demand, then they wouldn’t be talking about all of these exceptions and minor numbers.”