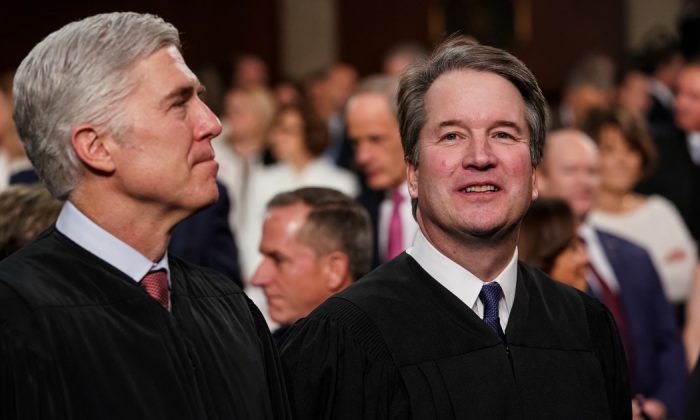 Supreme Court Justices Neil Gorsuch and Brett Kavanaugh attend the State of the Union address in the chamber of the U.S. House of Representatives at the U.S. Capitol Building on February 5, 2019 in Washington, DC. (Doug Mills-Pool/Getty Images)
Politics

Mississippi is working toward enacting one of the strictest abortion laws in the nation, in a race with other states to push a legal challenge to the more conservative U.S. Supreme Court.

The Republican-controlled Mississippi House and Senate passed separate bills Wednesday, Feb. 13, to ban most abortions once a fetal heartbeat is detected, about six weeks into pregnancy. Efforts to pass similar bills are underway in Florida, Kentucky, Ohio, South Carolina and Tennessee.

“I see in this country that we protect sea turtle eggs and we protect other endangered species of animals with a greater degree of scrutiny and zealousness than we protect a child in the womb,” Republican Sen. Angela Hill, a sponsor of the Mississippi bill, said as she fought back tears during a debate.

Anti-abortion legislators and activists believe President Donald Trump has strengthened their cause with his appointments of conservative Justices Neil Gorsuch and Brett Kavanaugh to the Supreme Court. Abortion opponents foresee the possibility that the high court might either reverse Roe v. Wade, the 1973 ruling establishing a nationwide right to abortion, or uphold specific state laws that would undermine Roe.

Mississippi enacted a law last year to ban abortion after 15 weeks. The only abortion clinic in the state filed a lawsuit and a federal judge declared the law unconstitutional. The state has asked a federal appeals court to overturn the ruling.

The House and Senate must agree on a single version to send to Republican Gov. Phil Bryant, who is in his final year in office. He said he would sign it.

“I’ve often said I want Mississippi to be the safest place for an unborn child in America,” Bryant said Wednesday on Twitter.

This is an election year in Mississippi, with all legislative seats and statewide offices on the ballot.

“Other than election-year political pandering, why did you bring this bill to the House of Representatives? Because you know it is going to be overturned by the courts,” Democratic Rep. Steve Holland of Plantersville asked the House Public Health Committee chairman, Republican Rep. Sam Mims of McComb.

Mims said that he and some other House members “feel strongly that life begins at conception.”

In a November 2011 statewide election, Mississippi voters rejected a proposed “personhood” state constitutional amendment that would have defined life as beginning at fertilization.

The bills advancing Wednesday say abortions could be allowed after a fetal heartbeat is found if a pregnancy endangers a woman’s life or one of her major bodily functions. Both chambers rejected efforts to allow exceptions for pregnancies caused by rape or incest.

Democratic Rep. Chris Bell of Jackson said an early ban hurts women: “Can you imagine one of your loved ones being raped and having a child that looks like the rapist?”

Democratic Sen. Deborah Dawkins of Pass Christian said many women may not know they are pregnant by six weeks. She also said a transvaginal probe might be needed to detect whether a woman has passed the cutoff point for abortion to be a legal option.

“For a rape victim, a transvaginal ultrasound becomes another intrusion into their already violated body, and there are no provisions for the physician or health care provider to opt out of this invasive medical procedure,” Dawkins said. “Who thinks it is the role of the Mississippi Legislature to direct medical treatment methods for patients?”

An Iowa judge struck down a similar law in that state last month.