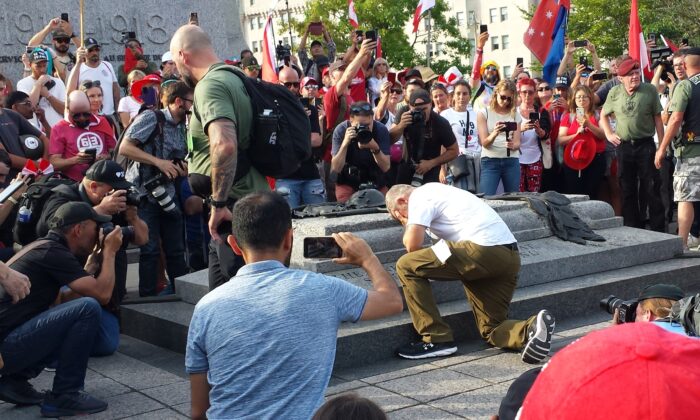 Veteran James Topp takes a knee in front of the Tomb of the Unknown Soldier in Ottawa on June 30, 2022. Topp walked 4,300 kilometres from Vancouver to protest against vaccine mandates. (Noé Chartier/The Epoch Times)
Canada

OTTAWA—Veteran James Topp accomplished his mission on Thursday when he climbed the steps of the War Memorial in Ottawa and took a knee in front of the Tomb of the Unknown Soldier.

Supporters were waiting for him at the Memorial, while another big group was walking behind him, most of whom had joined him on the last leg of his journey as he arrived in Ottawa on June 30.

As Topp approached his final destination, people began cheering and yelling, but organizers told the crowd to contain their excitement and keep silent as the veteran slowly made his way to the Tomb.

At every step, organizers, veterans, and a small security detail tried to get the crowd to make space for Topp, as people sought to get close to him.

After Topp stood up from kneeling, shouts of “Hero!” and “Thank You!” could be heard. Topp then took the microphone and presented the team that had supported him along the way.

The veteran and his team of 12 completed the 4,300-kilometre journey on foot from Vancouver to Ottawa, which Topp started in February to protest against COVID-19 vaccine mandates.

As a civilian in the RCMP and a military reservist, Topp was affected by two mandates.

He told the crowd he had undertaken the march as an act of protest, “but this is not about that anymore.”

“This is about the completion of this march and what we’ve accomplished,” he said.

“You all helped me get here as well. It wasn’t just me marching, it was all of you. Everyone I met, from Vancouver to Ottawa, you’re the ones responsible for getting me here. I could not have done it without the encouragement and the support in every possible way.”

The last day of the trek started in Bell’s Corner, west of Ottawa. There were many more people at the rendezvous point compared to the previous day, when about 20 to 40 people walked with Topp throughout the day.

On Thursday morning, about 150 supporters lined up in two rows for the final leg of the walk, with veterans facilitating an orderly move.

Ottawa police were present in small numbers from the start to near the end. They didn’t block intersections for the crowd making their way to the waypoint of Hog’s Back Park, who ended up being separated by large distances due to traffic lights.

By the time Topp reached Hog’s Back Park, the number of supporters had grown to around a 1,000.

He spent about an hour shaking hands, giving hugs, and posing for pictures with people wishing to meet and thank him. The group then walked down Colonel By Drive along the Rideau Canal, which was closed to cars, and its numbers kept growing.

In the downtown area, the group passed the Rideau and Sussex intersection—the same spot where veterans were roughed up when police started clearing the Freedom Convoy protest on Feb. 18.

They then walked up Wellington, took a left on Elgin, and entered the grounds of the National War Monument.

A group of counter-protesters that showed up could be heard yelling obscenities, but their presence didn’t derail the event.

After Topp finished his speech, he met again with supporters who came to express their gratitude.

Topp told The Epoch Times on Wednesday that he had not given any thought to what comes next for him, being solely focused on completing his task.

The first thing now is to get some rest, he told the crowd on Thursday.